Our missing local banking infrastructure, why it matters and what can be done about it

Most people are familiar with the manifold failings of the UK banking infrastructure.

This briefing sets out the case that Britain is missing a critical sector of banking which its competitor nations have, and that this undermines the UK’s ability to capitalise on its entrepreneurial culture. 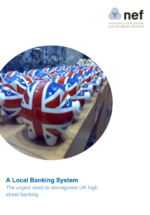