This report examines the distribution of electoral power amongst voters in the UK and the possible impact of a change in the electoral system.

It compares the distribution under the current First Past the Post system (FPtP) with the Alternative Vote system (AV) which will be put before voters in the May 2011 referendum. Our aim is to help voters consider the impact of the choice on offer in the referendum.

Our analysis shows that moving from FPtP to AV will mitigate some of the distortions of the current system, but that inequalities and inefficiencies in the distribution of voter power would remain.

Our research builds on nef’s 2005 report Spoiled Ballot which developed the first Voter Power Index (VPI). The VPI measures the power of voters to change the outcome of the election. Voter power is measured for each constituency and is determined by the chance of it changing hands and the number of voters. The more marginal and smaller the constituency, the higher the VPI score.

The key findings of our analysis are that moving from FPtP to AV would
produce:

While these improvements are significant, moving to AV will go only some way towards mitigating the unequal power of votes and the wasted votes within the British electoral system. Voter power is unevenly distributed under both systems and the fact that the average VPI score for each system is well below the ideal score of 1 suggests that neither system is very good at translating votes into electoral power.

The inequality and inefficiency are caused by the use of single-member constituencies. This produces large numbers of very safe seats where votes for one party pile up into large majorities, while votes for other parties are effectively discarded. To fundamentally address these issues would require moving to larger constituencies which elect more than one member of parliament. This is not currently being considered by the Government and is not an option in the forthcoming referendum. VPI is one measure
among several factors to be considered when comparing different electoral systems.

Our findings make two important points about voter power in the UK. First, they show that voter power is highly uneven across the country, or rather between constituencies. Under the current system of First Past the Post (FPtP), the most powerful 20 per cent of voters have 21 times as much power as the least powerful. This is the statistical reflection of a well-understood fact: it is the voters in marginal constituencies who determine the outcome of an election.

Both voters and parties are well aware that some constituencies are more important than others. In election campaigns, parties spend more than twice as much in the most powerful seats as in the least. Turnout in marginals is up to 6 per cent higher than in the safest seats. At the last general election as many as a million people may have been deterred from voting because they live in safe seats.

Our second finding is that the current system is inefficient in turning votes into seats. The average voter power score is only 0.285 compared to an ideal score of 1 which represents every vote counting equally towards the outcome of a general election. In the FPtP system many votes are effectively wasted because they form part of large majorities or are cast for candidates who do not win.

The effect of moving to the Alternative Vote

Our analysis demonstrates that switching to AV would mitigate both of these issues somewhat. Our modelling suggests that AV would increase the number of constituencies which change hands at each election: from 13 per cent to 16 per cent. This leads to a significant increase in the number of strongly contested very marginal seats: 125, up from 81.

Moving to AV mitigates, rather than eliminates the inequality and inefficiency of FPtP. Because AV retains the current system of small, single MP constituencies, its overall effects on the distribution of voter power are limited.

By contrast, the system of large, multi-member constituencies used in the Euro-elections offers significantly higher and more even distributed voter power. British voters in the 2009 European Parliament elections had an average VPI score of 0.962.2 While the system used in the European elections is not ideal – it uses an allocation system which favours large parties and uses closed rather than open lists – this score does highlight the potential of multi-member constituency systems to significantly impact on the distribution of voter power. 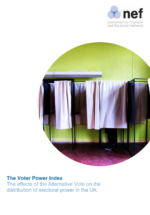