The distribution of total greenhouse gas emissions by households in the UK, and some implications for social policy

This paper maps the distribution of total direct and embodied emissions of greenhouse gases by households in the UK and goes on to analyse their main drivers.

Previous research has studied the distribution of direct emissions by households, notably from domestic fuel and electricity, but this is the first to cover the indirect emissions embodied in the consumption of food, consumer goods and services, including imports.

To study total emissions by British households we link an input-output model of the UK economy to the UK Expenditure and Food Survey. Results are presented as descriptive statistics followed by regression analysis. All categories of per capita emission rise with income which is the main driver. Two other variables are always significant: household composition, partly reflecting economies of scale in consumption and emissions in larger households, and employment status. This ​‘standard’ model explains 35% of variation in total emissions, reflecting further variation within income groups and household types.

We also compute the distribution of emissions derived from the consumption of welfare state services: here, lower income and pensioner households ​‘emit’ more due to their greater use of these services. To take further account of the social implications of these findings, we first estimate emissions per £ of income. This shows a reverse slope with emissions per £ rising as one descends the income scale. The decline with income is especially acute for domestic energy, housing and food emissions, ​‘necessary’ expenditures with a lower income elasticity of demand.

Next, we move away from per capita emissions by assuming children under 14 emit half that of adults, which reduces disparities between household types. To implement personal carbon allowances, further research will be needed into the carbon allowances of children and single person households.

Current government policies to raise carbon prices mainly in domestic energy are found to be especially regressive, but tracking total carbon consumption within a country would require radical changes in monitoring carbon flows at national borders. In the meantime, poorly targeted policies to compensate ​‘fuel poor’ families should give way to more radical ​‘eco-social’ policies, such as house retrofitting, coupled with ​‘social’ tariffs for domestic 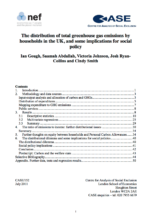