Redressing the privileges of the banking industry

Banks are fundamentally different from other companies and regulators are letting the industry exploit its unique status to realise excessive profits.

This is apparent in its relationships both with the state and with customers. The proposals in the interim report of the Independent Commission on Banking (ICB) do not go far enough to achieve a fair deal for either taxpayers or consumers.

A fair deal for taxpayers?

Banks occupy a unique position in our economy and enjoy privileges that other industries can never hope for. This is most obvious in the way that major banks – Northern Rock, Royal Bank of Scotland, and Lloyds TSB – were bailed out by the government during the financial crisis, moves that have prompted a great deal of public concern.

But these bail-outs were just the tip of the iceberg. All the large banks also benefit from an implicit subsidy from taxpayers; because they will be bailed out, if necessary, markets view lending to them as low risk. This report quantifies this ​‘too big to fail’ (TBTF) subsidy using methodology developed by the Bank of England. We found that while the TBTF subsidy has fallen from its mid-2009 peak, the ​‘big five’ UK banks still enjoyed a combined TBTF subsidy of £46 billion in 2010. The TBTF subsidy in the UK is 62 per cent higher than in Germany, despite the latter having a significantly larger economy.

Barclays, Lloyds, RBS, HSBC, and Nationwide enjoyed subsidies of £10 billion, £15 billion, £13 billion, £7 billion, and £1 billion respectively. Whilst the government does not transfer these funds directly to the banks, it does pay for the subsidy indirectly through its own borrowing costs, which increase to reflect the additional risk it is taking on board.

This is not all, banks benefit from further special treatment:

The ICB’s primary prescription for tackling the TBTF issue is to ring-fence retail banking from investment banking activities. Yet the Commission admits that ringfencing will only reduce and not eliminate the subsidy.

The size of the benefits extended to the banks compares unfavourably with the tax received in return. For example, a report by PricewaterhouseCoopers (PwC) calculates a total amount of taxes borne by banks for the year to April 2010 to be £15.4 billion. If the government is to avoid subsidising the profits and pay of major banks and their staff, and achieve a fair deal for taxpayers, it needs to claw back the subsidies the banking industry enjoys by ensuring it pays its fair share of tax. This is one of the major arguments of those calling for a so-called Robin Hood Tax on financial transactions.

A fair deal for customers?

The governance of banking is suffering from a public-interest deficit. Market power is concentrated in the hands of a small number of very large banks and significant barriers prevent new entrants coming into the market to challenge the status quo.

In addition, banks are able to take advantage of their greater access to market information and economically ​‘irrational’ customer behaviour – such as the tendency of customers to underestimate how much they will need their credit cards – to increase their profits. In particular, the complex, uncertain, and long-term nature of many financial products makes the exercise of customer choice ineffective in ensuring that the interests of customers and the public in general are upheld.

The ICB’s proposals to help improve competition in UK banking are disappointing. The Commission touches on the key issues but appears reluctant to tackle them. Instead, it latches on to easy prescriptions, such as selling off additional branches of Lloyds, which our analysis suggests will not bring about effective reform.

A proposal to create a new challenger is is unlikely to significantly improve competition. Instead, the main emphasis should be on protecting consumers, ensuring that consumers understand the products that they are being sold, and that banks explicitly provide all the information that their customers need in order to make good decisions. The interests of bank executives, owners, customers, taxpayers, and citizens are out of kilter and need to be brought into alignment.

Banking is indispensible to our economy and more akin to a public utility than a free competitive marketplace. It is totally unlike other industries because it acts as the operating system for the whole economy. When they crash, it affects everything. Banks create 97 per cent of the money in our economy, and the amount of money flow to businesses and consumers remains dependent on the mood swings of bankers. Banks operate the everyday payments system on which almost all economic transactions depend.

Consequently, the stability and conduct of banks are a matter of public interest far beyond that of other companies.

As this report demonstrates, private interest and competition alone cannot be relied on to serve customers well at reasonable cost, or to support economic prosperity and social progress. Despite this, banks have been given an inappropriate level of freedom, and have been allowed to profit at the expense of taxpayers and customers alike. It is time to bring an end to the bankers’ private welfare state. 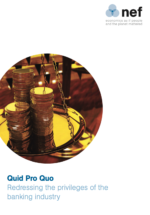