A report by nef for the Trades Union Congress (TUC), July 2012

This report, conducted by the New Economics Foundation for the Trades Union Congress, examines the Government’s arguments for localising public sector pay and the potential economic impact of the policy. It finds that these arguments are not supported by the evidence, and that the policy would have a significant negative impact on the economy which could reach almost £10 billion.

The Government has expressed its intention to introduce more ​‘local market facing’ pay in the public sector, specifically to address perceived gaps between public and private sector pay, particularly in regional economies outside London and the South-East.

Whilst little detail has been made available about the way the policy might work, it seems likely that in the current climate of spending cuts and pay restraint, it would lead to long-term pay freezes for public service workers in much of the UK.

The Government has justified this proposal with reference firstly to gross pay differentials between the public and private sectors; secondly to the assumption of much greater responsiveness of private sector wages to local conditions; and thirdly to the crowding out hypothesis. According to this hypothesis, since private sector firms have to compete with public sector employers for staff, reducing the so-called public sector pay ​‘premium’ would help businesses to become more competitive and to expand.

In this report, commissioned by the TUC, we have closely examined the basis for the Government’s evidence on all three of the points above. We find that none of them stand up to close scrutiny. We have also conducted what we believe to be the first attempt at modelling the potential impacts of the Government’s proposal on regional economies in England and in Wales, and on the national economy. Our key findings are set out below.

We find very weak evidence to support the idea that there is a public sector pay ​‘premium’. The Government’s evidence on the issue2 suffers from a number of serious shortcomings. In particular, the different nature and profile of employment in the public and private sectors indicates that occupational and pay structures are barely comparable. Language around a ​‘premium’ which suggests exceptional pay is at best misconceived, at worst mischievous and ideologically driven.

The theory and evidence around the crowding out hypothesis remains highly contested in economic theory and practice, and is not supported by observational data. Business surveys suggest that private sector agents do not experience pay in the public sector as an impediment to growth or recruitment.

We modelled the economic impacts of localising public sector pay under different crowding out scenarios, ranging from an approach which applies the Government’s argument that crowding out exists, to the opposite end of the spectrum with no crowding out at all. The results of this exercise reveal overall net economic costs in each region of England and in Wales and across the national economy. We find potential savings to the public purse to be minimal, even without taking account of additional administrative costs, which could be substantial.

The magnitude of the reduction in economic performance varies across regions. Nonetheless, under a best case scenario, where private sector jobs are created in response to an overall reduction in public sector pay, the costs in national terms still outweigh the benefits, with an overall annual net loss of 0.12% of UK GDP or £2.7 billion – a far from negligible reduction. In contrast, in a scenario where there is little or no private sector employment response to a fall in public sector pay the annual net costs at a national level would reach £9.7 billion, equivalent to 0.43% of UK GDP.

Overall, our research indicates that the evidence does not support measures to make public-sector pay more ​‘market-facing’, and shows that the costs to the economy could be substantial. This negative economic impact is the case even if there were some benefits in terms of private sector job creation — an outcome that our analysis shows is highly uncertain. 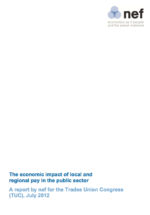