If we are to remain within safe global carbon emissions, 80 per cent of declared proven fossil fuel reserves are unburnable. Far from being assets, these are potentially toxic financial liabilities.

In 2010, governments from around the world gathered at an international climate change conference in Cancun, Mexico and agreed to limit climate change to 2°C above pre-industrial levels. A year earlier, a group of leading climate scientists concluded that to retain a one-in-five chance of keeping global average surface temperature within this ​‘safe’ limit, global carbon emissions could not exceed 886 billion tonnes of CO2 between 2000 and 2049. Using the most up-to-date figures we find that in the first 12 years of that period from 2000 to 2012, almost half of this global carbon budget has been used.

Furthermore, potential emissions from proven, unburned reserves of fossil fuels, amount to between four and five times the global carbon budget between now and 2049. In other words, these fossil fuel reserves are unburnable. On that basis, around 80 per cent of the declared proven reserves are unburnable. They are not assets, they are misvalued, and potentially toxic financial liabilities. The recent banking crisis taught the world a difficult lesson concerning the mispricing of risk. If it turns out that a huge amount of the assumed value represented by reserves of fossil fuels can never be brought to market and realised – something which climate science says indeed must be the case – then without a quick and careful re-evaluation of carbon risk and value, the economy is in danger of a far worse crash than the one orchestrated by the finance industry in 2008.

In spite of this, money still flows into fossil fuel exploration and production. Knowingly or not, investors continue to finance the exploration and development of new fossil fuel reserves which, if we are to prevent potentially irreversible climatic upheaval, can never be used. There is a huge imbalance in the levels of investment going into the fossil fuel industry compared to cleaner, renewable sources. In 2012, the oil and gas sector is expected to spend more than $1 trillion on capital expenditure, much of which will be used for further exploration and development of new sources. In contrast, 2010 global investment in clean energy reached just $243 billion.

Any list of the world’s largest companies is dominated by fossil fuel companies and others, like car makers, dependent upon their products. The global economy is, in effect, on a deeply unsustainable path. And, despite the commitment in Cancun, governments are failing to demonstrate the leadership needed to change the economy’s course.

Why is this so? In the following report we draw on interviews conducted with industry experts to identify and understand the barriers to the transformation of the economy to a more sustainable footing. We then suggest key actions that could be taken to overcome them. 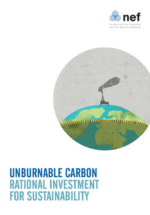