Exchange-traded funds are no longer the simple, transparent products they once were

While originally conceived as a cost efficient alternative to traditional asset management, which was frequently found to miss even its basic objectives, ETFs have since mutated into complicated, leveraged structures where investors have often unknown exposures to large investment banks.

As a result, derivatives are being sold to the general public, despite people not having the expertise to understand that this will often result in the return on their investment differing significantly from the return on the underlying market that their money is tracking. While comparisons with the ill-fated Collateralised Debt Obligations (CDO) market exaggerate the risks to the global financial system currently posed by these products, the ETF industry is nevertheless in urgent need of reform. The products are typically not transparent, and many should no longer be marketed to the general public.

The first ETFs attempted to mimic the performance of major indices, such as the FTSE 100, by simply buying the appropriate mix of shares. However, nowadays, ETFs often enter into off-exchange derivatives contracts with investment banks. This means that (a) the performance of the fund will frequently differ from that of the advertised index it is tracking; and (b) many investors are unaware that their investment is dependent on the financial health of major investment banks. ETFs that track commodities provide another example. These funds buy ​‘futures contracts’, a type of derivative that must be ​‘rolled over’ periodically, if investors are to avoid having the commodity delivered to their doors. This rolling process is often highly expensive, and can result in investors losing money, even when the price of the commodity itself has increased. More to the point, what percentage of the public who have bought such ETFs understand ​‘rolling’, and how it may impact on their investment?

It is irresponsible and inappropriate to sell complicated products to the general public, which they are highly unlikely to ever fully understand. Unfortunately, such practices are currently widespread in the ETF industry.

ETFs that use derivatives can leave investors exposed to large investment banks. If such a bank goes bust, the public may lose their ETF investments, or be left with collateral that sometimes has no relation to the market they believed they were invested in. However, very little information is currently provided to investors about such a scenario. For example, investors are not typically informed of which investment banks they are exposed to, and what type of collateral the ETF is prepared to accept from its counterparties.

In a bid to boost fund-manager returns, many ETFs now lend investors’ assets out to banks and other financial institutions. While such lending is generally very short term and collateralised, and, thus, is low risk, the ETF generally provides very little information as to how the proceeds are split between fund investors and fund managers. As a result, fund managers may frequently be taking the lion’s share of the returns, despite it being investors who are shouldering the risks.

Interference with the smooth-running of markets

There are concerns that ETFs may be disrupting markets that are typically less popular with investors, such as those for small companies or emerging markets. This is because ETF investment may be a significant percentage of total investment in such markets. ETFs buy all, or a selection, of the stocks in an index, rather than pick stocks on a basis of their individual merits. Thus, if ETF investment is a significant driving force in a market, then this may interfere with market discipline, where well-managed companies should see the price of their stock rise and, in contrast, poorly-managed companies should decrease in value.

Similarly, there is a risk that speculative ETF investment is interfering with the smooth-running of commodities markets. While the debate as to whether or not speculation impacts on food prices is on-going, regulators should surely err on the side of caution and be careful not to prioritise investor’s interests over the stability of these vitally important markets. Whilst speculation undoubtedly can bring valuable liquidity to a market and help smooth volatility, speculators now constitute the majority of participants in many commodities markets. A cursory glance through economic history, at the many bubbles and crashes that have occurred, demonstrates that speculators often seriously misprice assets, and regulators should thus be taking this threat seriously.

Build-up of risk in the financial system

While investment in ETFs remains a small percentage of, for example, investment in traditional mutual funds, it is unlikely that the industry poses a large risk to the financial system. However, if ETFs continue to grow in popularity at the rate seen in recent years, this may soon no longer be the case.

A window of opportunity for reform

Regulators from around the world have already issued warnings about ETFs, and, as the industry continues to be in the spotlight in the aftermath of the rogue ETF trader at UBS, there is currently a real opportunity for meaningful reform. If these hopes are realised, then ETFs could once again be the simple, transparent investment vehicle they were originally conceived as, rather than the cause for concern they have since mutated into. 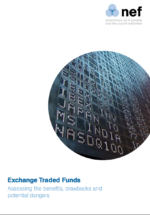