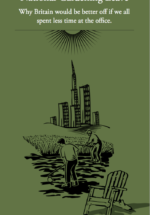 9 things we need in the energy security strategy

This is a precious opportunity to wean ourselves off volatile fossil fuels and tackle the cost of living crisis - the government mustn't squander it.