The economics of oil dependence

Why the oil industry today is like banking was in 2006

As growth in oil production slows and global demand continues to rise, sustained high oil prices and price spikes will have a significant impact on the economy, in effect placing a glass ceiling on economic recovery.

The analysis presented in this report shows that this threat is as real and as imminent as was the banking crisis in the middle of the past decade. Without bold and imaginative action, the consequences will cast a shadow on generations to come. Unemployment, underfunded essential services, recession, and depressed and crippled economies provide daily reminders of what the future will hold.

Oil prices and the recession

Slowing the rate of decrease in oil production can only be achieved by a potential doubling of the price of oil over the next decade. This is likely to usher in the phenomenon of ​‘economic peak oil’. In this report, we define this as:

…the point at which the cost of incremental supply exceeds the price economies can pay without significantly disrupting economic activity at a given point in time.

Beyond this ​‘pain barrier’, the level of oil prices will have a dramatic effect on a nation’s people and its economy, threatening stagnation and hardship.

Using this definition of economic peak oil, our analysis provides a new method for determining the likely timing of peak oil, compared to the more common method of simply looking at new capacity, subtracting depletion, and balancing that against the most likely trajectory for growth.

A crisis of the cost and availability of transport fuels

In this report we argue that the current economic crisis is neither an oil crisis nor an energy crisis, but a crisis related to the cost and availability of transport fuels – gasoline, diesel, jet kerosene, and ship bunker fuel. These liquid fuels account for up to 80 per cent of all oil usage.

Transport fuels link all elements of the economy. If every linkage costs more due to sustained high oil prices, all costs will increase, the economy will slow, and inflation will rise.

The vulnerability of oil-importing economies

Nations that are increasingly dependent on oil imports face two threats over which they have very little control.

First is the increasing consumption of oil in the producers’ own countries. Saudi Arabia, traditionally the largest oil exporter in the world, exported less oil in 2011 than it did in 2005 or even 1985. This is despite large increases in production in recent years.

Second, some importing countries may be better able to accept higher prices for oil.

In mature high-consuming economies like the USA, oil prices greater than $90 per barrel will have a significant economic impact. However, industrialising economies, such as China, are thought to be able to tolerate prices in the $100 – 110 per barrel range.

Softening the impact of high oil prices can only come from three sources: greater supplies of low-cost oil, greater efficiency in use of oil, or a transition to a low carbon economy.

New sources of low-cost oil: No new sources of low-cost supplies are known. For example, optimism about shale oil fails to recognise that the additional supplies represent a higher cost. As oil is priced by the cost of incremental supply and this is a high cost, significant falls in oil prices can only occur if there is a major recession or depression, similar to that seen in the second half of 2008.

Improved efficiency in oil use: Greater efficiency in use occurs continuously, but it is relatively slow, occurring at a rate of just 2 – 3 per cent a year. A major drive to increase efficiency in use could be achieved through government incentives and regulation, but demand management would be necessary to avoid increases in efficiency leading to growth in demand – the so-called rebound effect.

Transition to a low carbon economy: The transition to low-carbon economies will reduce the impact of high oil prices. Yet despite the need to and the knowledge of how to make this transition, the policies to manage the economy in this way remain mostly absent and slow to progress.

Supporting the transition to a low carbon economy

The only option to soften the impact of high oil prices that is likely to meet the magnitude of the challenge is a transition to a low-carbon economy. But this will require political leadership and policy certainty to create a long-term, sufficient and consistent incentive structure for renewable energy.

We recommend the government employs available and new mechanisms for public sector finance, such as a Green Investment Bank to change investor behaviour in favour of new, low carbon sectors.

In addition to issues of security and sustainability, the impact of economic peak oil is another important reason to reduce an economy’s energy intensity and dependence on oil.

Because of this, we recommend urgently that: 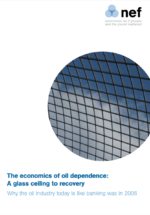