Life at the end of the welfare state

Welfare reform and public sector cuts are adding significant pressure to a system already buckling under the strain of growing demand and underfunding. This is leading to unsustainable human, social and economic costs.

For the past 18 months nef has been working with people in some of the most deprived communities in Birmingham and Haringey to explore their experiences of the government’s austerity measures and its ambitions for building a ​‘Big Society’.

Through more than fifty interviews with local people and organisations, and through peer research and capacity building workshops, we have been exploring:

In our last interim briefing we showed how unprecedented cuts to the budgets of local authorities, and to those of voluntary and community organisations, risked undermining the ideals of the Big Society. We showed how local authorities and voluntary organisations are experiencing a perfect storm of increased demand for services and reduced resources to provide much needed support.

We documented how the cuts are being felt most acutely by some of the most vulnerable groups, including the elderly, those with disabilities and women. For many the ambitions and ideals of the Big Society seemed remote and irrelevant as their time and energy were consumed trying to make ends meet. At the time of our last interim report, the main driver of increased local demand for services was the economic recession; unemployment and debt were highlighted as particularly important issues in people’s lives.

Six months on, in this report, we show how changes to welfare are now exacerbating these underlying challenges and driving up demand for local services, as people’s incomes fall and access to support, such as childcare and social care, is reduced. The combined impact of welfare reform and public sector cuts are adding significant pressure to a system that was already buckling under the strain of growing demand and underfunding.

As a result, in the short-term, charities and communities are under growing pressure to step in where the state has withdrawn. In the long term social crises are likely to build up leading to unsustainable human, social and economic costs.

What we present here are some of the unfolding stories, testimonies and case studies of the people and groups living and working in an age of uncertainty and austerity. They speak of mounting challenges, growing social and economic costs, and the sober acknowledgement that the worst is yet to come. 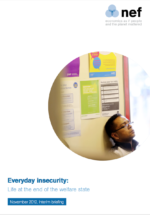