The natural environment underpins our social and economic systems; it makes life on Earth possible and worth living.

As well as its intrinsic value, it contributes to the delivery of key policy goals and plays a critical role in responding to the economic and environmental challenges that our society faces today by increasing our resilience and encouraging a more sustainable lifestyle. Yet in spite of the growing evidence, we are failing to realise its potential.

In the context of economic and environmental crisis, governments will need to find new ways to deliver well-being to society. The natural environment is a key resource to do so in a cost-effective way.

Through their ongoing work, several organisations are already revealing the potential of the natural environment, strengthening the case for it to be placed at the centre of policies for economic recovery and well-being. Whilst some of the existing evidence and practice are already recognised in key policies, the natural environment is still all too often presented as a problem instead of a solution.

This report provides an overview of the multiple ways in which the natural environment is being used to deliver key society goals. It reveals how organisations with different missions share a common interest in having a healthy environment.

Whilst the report focuses on what goods and services the environment gives us rather than on its intrinsic value, it is not our goal to reinforce an often unhelpful tendency that just views the environment from a utilitarian perspective (i.e. what can the environment do for me?). The value of the environment goes far beyond that. Funded by the Calouste Gulbenkian Foundation, the ultimate goal of the report is to identify interventions to realise the potential of the natural environment through coordinated action by a broad group of organisations.

Over the past few months, nef (the new economics foundation) has reviewed existing literature and carried out interviews with representatives of 33 different organisations with the goal of answering the following questions:

• What evidence is out there linking nature with well-being, and nature with pro-environmental behaviours?

• Is this evidence taken into consideration in policy-making?

• How are third sector organisations using the existing evidence?

Our research found that:

• The evidence is abundant and good enough to be taken into consideration by policymakers. It needs to be further strengthened and disseminated in order to influence public spending.

• The existing evidence is not being fully exploited. There is an increasing awareness in policy circles about the multiple benefits of the natural environment to society. However, the vast majority of policymakers are not fully aware of it.

• Action at the national level remains a key priority but action at the local level is likely to become more effective as – and if – government’s localism interest materialises. Local governments are likely to have greater decision-making powers and competences. Health and well-being boards and local nature partnerships are clear opportunities to advance the nature/well- being agenda.

• There are several examples of innovative partnerships amongst and between third sector organisations and the private and public sectors.

• Better coordination with other organisations is a commonly shared aim as it makes them more effective at a time of limited resources.

In order to realise the potential of the natural environment, we recommend taking action on three main fronts:

• Encourage information sharing and strategic coordination among organisations, through the establishment of a network or common platform.

• Make the most of existing evidence and practice by packaging it in an accessible and user-friendly format with the goal of:

• Strengthen evidence, in particular on the socio-economic benefits of the natural environment and links between nature and pro-environmental behaviour.

The findings of the research suggest that there is a favourable context to bring together a wide range of organisations to translate existing synergies into a louder and more effective voice for a healthier natural environment. 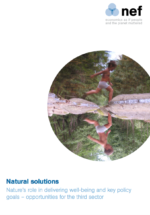