Considering the alternatives to HS2

One year on from the Government’s decision to proceed with the HS2 project, the question remains whether the £33 billion scheme is the best investment for achieving the Government’s strategic objectives. At a time of serious economic difficulty the role of infrastructure investment is clear and the time is ripe for heroic approaches, but not by being cavalier with society’s scarce resources. With the first phase of the project not due to begin construction until 2016, the Government has time to get this right.

A year has passed since the Government decided to proceed with High Speed 2 (HS2), the prospective trans-national high speed rail scheme.

During that time public attention may have drifted away from the merits and shortcomings of the Department for Transport’s (DfT) landmark project, but its significance as the single largest publicly funded transport project in UK history is undiminished.

Government documents on HS2 do not set out clearly defined objectives for the £33 billion investment. Proponents of the HS2 project, including ministers, state, however, that it will be a catalyst for economic growth, job creation, rebalancing the nation’s economic geography, providing necessary rail capacity and helping to achieve reductions in greenhouse gas emissions.

NEF is conducting an independent and impartial research programme on the HS2 investment proposal and the extent to which it will deliver these anticipated benefits. Our aim is to examine the overall value that HS2 will produce for UK society compared to relevant alternative investment options. This work builds on our application of Social Return on Investment (SROI) methodology to public policy-making, including infrastructure decisions.

While we fully recognise the possibility that HS2 could help transform Britain’s rail network serious questions remain around the wisdom of a single investment of this magnitude, the ability of the project to meet important objectives for the UK, and the process for making the decision.

NEF believes that alongside extreme polarisation of the debate around HS2 the Government has issed a vital element in the appraisal. What is needed is a more thorough appraisal of different alternative investment options that can achieve the strategic goals outlined above. Only then can we know if HS2 offers the best return for the investment.

As a result the next phase of NEF’s research will be to develop alternative investment packages of like scale and ambition for appraisal alongside HS2 and in this way test the best way of achieving objectives. These investment packages will be developed in consultation with key stakeholder groups to reflect both available evidence and experience from the ground. This short briefing paper provides background to explain and support the work we are doing. It covers some of the issues most critical to the questions we are striving to answer within this research programme. 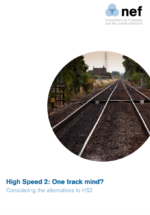