Why we need a new macroeconomic strategy

Our approaching triple-dip recession was a direct result of the government’s flawed economic strategy.

The case for austerity rests on two false premises: that the previous government had been spending excessively, and the government debt and deficit are the main threat to our economic stability. But the real threat to stability lies in our financial system – which, following the crash, led the UK into recession, decreasing tax revenues while pushing up government debt.

The government’s austerity strategy was founded on two other incorrect beliefs. First, the Coalition assumed that the private sector would fill the gap created by public spending cuts. In fact, business investment has grown by less than a third of the rate the government forecast in 2011 and 2012 and shows no sign of rising to the levels required to prompt an economic recovery.

Second, the strategy relied on export-led growth. Despite the pound falling over 20 per cent in value since 2007, exports have been volatile, reflecting global uncertainties, and the trade deficit shows few signs of closing. We have little chance of attracting more European export sales, and our import dependency is increasing.

Austerity is the wrong response to a demand-led recession. With both households and firms reigning in their expenditure the multiplier effect makes it foolish for a government to behave likewise, particularly given the economic uncertainty abroad.

A longer term analysis of the overall state of the UK economy finds it to be fundamentally weak:

We live in a high-carbon, high-debt economy. It used to deliver growth. Now it cannot even manage that. There are clear barriers to growth, and, worse, growth itself is unlikely to deliver for the majority. But ​“Keynesianism” alone – boosting government spending – will not reverse the course when debts remain high and the underlying economy is weak.

It is essential we carve a new path, though it will take significant effort and expenditure to do. A successful new macroeconomic strategy must recognise the path dependency of our current situation and shift to a completely new mode of operating. The first steps to ensure this will require us to: 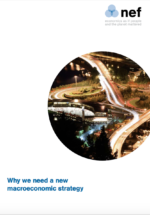