Towards a Welsh industrial strategy

A report in collaboration with the Welsh TUC

In the face of globalisation, prolonged economic crisis and a skewed UK economy, Wales needs to look to itself to mobilise new sources of sustainable industrial investment.

The financial crash of September 2008 drove the UK economy into a deep recession from which it has not subsequently recovered. Both the severity and the length of this recession were a direct result of the model of economic development adopted across the UK in the preceding decades, i.e. growth driven by the accumulation of debt, mobilised by an exceptionally large financial sector, leading to a prolonged period of deindustrialisation.

That model worked well for the richer regions of the UK, and particularly for the richer residents within those regions. But for the majority of the country outside of London and the Greater South-East, it led to a stagnation of real income that was superficially compensated through the accumulation of debt.

Since the crash, the tide of easy credit has receded, revealing the pronounced unevenness of the UK economy. We now live in the most geographically unequal nation in the EU. It contains both the richest region in the Union (in central London) and areas in the Welsh Valleys comparable in income to recent EU accession countries. Those regional inequalities have worsened considerably over the last two decades. For all the recent talk of rebalancing, our financial sector accounts for a rising share of gross domestic product (GDP), our manufacturing output has hit a 20-year low, and our current account deficit has reached record highs.

Wales, like other areas outside of the south-east of England, did not gain much during the boom years, and is now suffering more in the wake of the collapse.

Since the Industrial Revolution, the nation has depended on mobilising external sources of funding in order to deliver growth and development. It successfully attracted a large amount of capital expenditure for nationalised industries post WWII, and drew in impressive volumes of foreign investment during the 1980s. It is now clear, however, that these external sources can no longer be relied on. Foreign direct investment (FDI) in particular has fallen globally since the crash and is, in any case, shifting rapidly away from the developed world and into emerging markets. Wales should not attempt to compete on a cost basis in a shrinking FDI market. It needs a novel approach instead. Relative to much of England, Wales is comparatively lucky in having a well-established devolved administration with the legal and political authority needed to shape an alternative economic strategy. In the face of a poor macroeconomic outlook and a UK government that is unwilling to intervene effectively, this report outlines the case for a Welsh industrial strategy built on mobilising existing sources of funding.

A Welsh industrial strategy must break with the past and seek to identify the strengths (and weaknesses) of the Welsh economy. It must build on successful initiatives by the Welsh government in the recession, but also on Wales’s particular economic geography and industrial structure. Crucially, in order to carry the necessary authority to deliver, the strategy would require a government able to set central priorities for development.

Key recommendations of the report include: 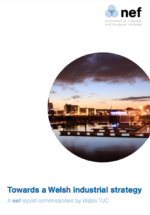