Consistent overfishing in European waters has led to smaller catches, lower revenues and fewer jobs than if our fish stocks were properly managed.

Consumers across the EU now effectively pay three times for their fish: for the value of the landings, the societal costs of overfishing, and for the subsidies received by the fishing industry.

The €0.93 billion available annually through the EMFF is no small sum: the equivalent of nearly half (46%) of crew wages for all EU fishers. The proposed subsidy for new vessel construction is equivalent to 16.9% of crew wages. It is clear that funds of this magnitude could have a tremendous amount of societal good if put to alternative uses.

Instead of funding new vessel construction, subsidies must support the transition towards fish stock restoration and higher, sustainable, fish catches for fishers in the long-term. 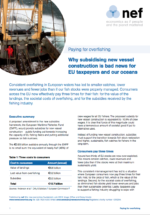