A simple model of income, aggregate demand and the process of credit creation by private banks

This paper presents a small macroeconomic model aimed at describing the main mechanisms of the process of credit creation by the private banking system.

The model is composed of a core unit — where the dynamics of income, credit and aggregate demand are determined — and a set of sectoral accounts that ensure its stock-flow consistency.

In order to grasp the role of credit on the functioning of the economic system, we make an explicit distinction in the core dynamic unit between planned and realized variables. This allows us to introduce an ex-ante wedge between current income and planned expenditure while maintaining the ex-post accounting consistency. Moreover, we simplify this mechanism, by abstracting from the speculative component of credit creation.

In our model growth is driven by the existence of a gap between the current income levels of firms and their future expenditure plans. Private banks are the only agents capable of filling this gap through the creation of new credit. A confident banking system, willing to grant credit to firms for productive investments, is thus a necessary prerequisite for the economy to prosper.

The dynamic unit is a small model per se, although not consistent from a stock-flow perspective. We show, both analytically and through numerical simulations, that the model can be characterized by two different long-run dynamics, one leading to a stationary state and the other to a balanced growth path. The firms’ propensity to invest and the willingness of the banking system to concede credit appear to be the most crucial parameters in determining which dynamic will govern the system.

A set of sectoral accounts is also present, representing the agents populating the economy: non-financial firms, banks, central bank, households and gilt sellers. Each agent is built using a double-entry bookkeeping methodology. Although not relevant for the determination of the economic dynamics, the additional variables introduced in this part are crucial to ensure the stock-flow consistency of the model.

Finally, we argue that our paper contributes in an original way to the literature on the subject. The model can be seen as an analytical representation of the idea, of which Hyman Minsky was the main creator, that in order to grow an economic system has to have expenditure plans higher than its current income. This was the same idea at the centre of the debate between Keen and Krugman in 2012 on the role of credit in the formation in aggregate demand, to which we offer a plausible ​“solution”. 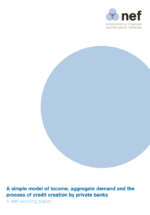