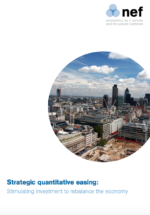 Survey: Tell us how Covid-19 has affected your income

Take our three-minute survey – and then share it with family and friends.

Weekly Economics Podcast: How can we make sure everyone has enough to live on?