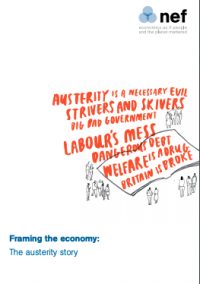 Well-framed, well-crafted and often repeated, the austerity story is the dominant political narrative in Britain today. It shapes how most of us think and talk about the economy. It has convinced most of the country of the need for huge public spending cuts and presents a coherent vision for the kind of society we should live in.

The Coalition tells a powerful story about the economy to make the case for austerity in the media and public communications. It is consistent, memorable, uses vivid images and emotional metaphors, and is simple enough to be understood and retold.

There are several frames that underpin it:

Most of the frames in the austerity story resonate with millions of people in the UK:

This has tough implications for austerity’s opponents: when a frame is strongly held we tend to ignore facts that do not fit with it.

The austerity story is a powerful narrative that is embedded in public consciousness. It cannot be challenged with facts.

Only with new frames and a different story about the economy can it be dislodged.

Challengers to the austerity story

A number of organisations and individuals communicate alternative narratives to the austerity story. None have the coherence or appeal of the Coalition’s account of the economy, although each offers insights into how we might tell a different story. The challengers’ weaknesses tend to fall into similar traps:

Towards a new story

The austerity story can be defeated, if its opponents identify and activate their own powerful frames. The frames must be developed from values and resonate with public opinion. They must be tested and refined based on what works. We outline some frames we believe could be used to build a new narrative, and a story that brings them together.

The battle for the economic narrative will be won with stories, not statistics.