A briefing on stakeholder banks

Co‑operative banks outperform shareholder banks on a number of measures: they generate more stable long-term profits, they provide better customer service, and they boost local economies by lending more to small and medium-sized businesses. Plus, their more prudential approach to managing capital allowed them to weather the financial crisis better than the commercial banking sector, demonstrating their positive contribution to financial stability.

Co-operatives are owned by members (usually their customers) rather than shareholders. This ownership model appears to have profound effects on the priorities and performance of the institutions. It places an incentive on managers to maximise long-term customer value, and ensures that profit is treated as a means to an end rather than an end in itself. This focus presents a range of benefits, not just for customers but for the economy as a whole:

To achieve economies of scale while retaining their local roots and accountability, co-operatives often collaborate in networks to pool resources and share services. This model has proved successful in many countries, although in some cases central institutions have become too dominant and entered non-traditional investment markets with poor results. Criticisms that co-operatives are unaccountably managed and inefficient are unconvincing. It is certainly the case that the ownership model prevents raising significant new capital to fund rapid growth and mergers and acquisitions; but, far from being a weakness, this model of steady organic growth actually contributes to the stability and prudence of co-operative banks.

Co-operatives account for a significant proportion of the banking market in many countries, particularly in Europe. Although the UK has one large co-operative bank, this differs from most co-operatives because it is not directly owned by its members and has no local accountability or governance.

We conclude that co-operative banks have thrived where independent local institutions have collaborated in networks to gain economies of scale, and where the regulatory environment has recognised and protected the co-operative ownership model.

Co-operative ownership makes rapid expansion difficult, particularly through acquisitions, and so alternative financing arrangements will have to be found. However, this is a difficult balance to strike; the benefits of co-operative banks tend to be eroded the more like commercial banks they become.

The expansion of the Co-operative Bank in the UK, for instance, raises an interesting question. That is, should government policy aim to help sizeable co-operatives compete directly with existing commercial banks, or should it help them compete by offering a genuine alternative? If the answer is the former, then it is unlikely that the benefits of co-operative banking sectors outlined in this report will be realised. 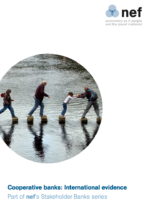 Ayeisha Thomas-Smith is joined by Svitlana Romanko and Tessa Khan