A briefing on stakeholder banks

Credit unions have a valuable part to play in building a healthy banking sector. They offer more inclusive banking than commercial banks, and performed much better during the financial crisis. Helping them prosper requires appropriate regulation, allowing them to compete with commercial banks and enabling them to collaborate in networks in order to create economies of scale.

Credit unions are a form of cooperative bank that offer a particularly strong emphasis on social objectives, and a restricted range of services to their members. As of 2011, they managed over $1.5 trillion worth of assets for 196 million members in 100 countries. Although they have common characteristics worldwide, they vary enormously in scale and scope of activities. They can only provide services to their members, who share a ​‘common bond’, such as a shared location, employer, occupation, or religion.

Governments typically place more restrictions on credit unions than on banks. This may be to help safeguard members’ savings from risky investment activities, to maintain their focus on lending to low-income households, or a reflection of their non-profit status.

However, there is a balance to be struck between promoting the safety and simplicity of credit unions, and undermining their financial viability and impact by over-regulating them. A number of factors determine the success of credit unions in different countries, including:

There is evidence to suggest that, in common with cooperative banks, the ownership structure of credit unions encourages long-term and prudent management, and a greater focus on the needs of customers. They deliver greater financial inclusion by maintaining branches in areas under-served by commercial banks, by out-performing on small and medium enterprise (SME) lending, and by successfully lending to low-income households and those with impaired credit records. They are able to perform well in lending to SMEs and low-income households because they devote greater local and personal knowledge to loan assessment and management. Credit unions also performed better than commercial banks during the financial crisis.

Naturally, commercial banks resist the idea of allowing credit unions to grow beyond the niche of ​‘poor-man’s bank’ and to directly compete with them. The evidence of the benefits of greater banking diversity in general, however, and of a financially viable credit union sector in particular, suggests that policymakers should be resolute in introducing policies to grow the sector, even if this appears to some degree to be at the expense of incumbent commercial banks. 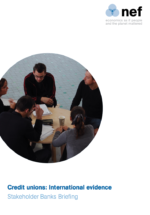