A return to growth but no recovery

GDP can’t tell us everything about how an economy is performing. The UK might now have returned to growth, but underlying problems remain. Only by looking at a set of alternative economic indicators can we identify what these are, and how to move towards a secure, long term recovery.

As Chancellor George Osborne has himself admitted, this recovery bears little resemblance to the one he and the Coalition originally wanted. In June 2010, the Office for Budget Responsibility (OBR) forecast an investment- and export-led recovery, where businesses significantly increased their spending to generate jobs and boost real wages. By 2013, they expected business investment to have risen 11%, and real earnings by 4%. This hasn’t happened. Investment is down 3.5% from this time last year, and median earnings have fallen for the longest period since official records began in 1964. GDP may be going up, but things are not going to plan.

GDP is an increasingly inadequate measure of progress. Over the last decade or more the presumed link between increasing GDP and rising living standards has broken down for most people, with real wages failing to rise with economic growth. So to discover what is really happening to our economy, we need to look beyond GDP. This paper sets out five indicators that allow us to better understand the short-term reality of the Coalition Government’s recovery and what it means for our economy in the long term. All five are standard economic statistics, either publicly available, or based on official sources. They are:

George Osborne himself has acknowledged that the recovery is ​‘unbalanced’ and ​‘not secure’. And looking beyond the single measure of GDP we can see this is an understatement. The five alternative indicators above, taken together and backed up by some additional context, reveal serious underlying problems in the British economy that must be addressed.

What our economy is going through now is not so much a recovery as a reversion. We’re going back to pre-2008 patterns of debt-led consumption growth masking low real earnings for most. But post-crash, with debt levels still high, these patterns are even more dangerous. 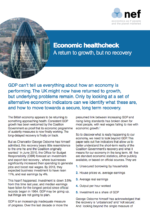