Working for the economy

The economic case for trade unions

The UK has paid a heavy economic price for three decades of anti-union policy and law. If the recovery from the recession is to be placed on a secure footing, the status of trade unions as an essential part of sound economic policymaking must be restored.

The share of wages in national income has declined across the developed world over the last thirty years. At the same time, and despite political rhetoric, growth in wage rates is significantly down on the levels achieved in the post-war period. For the UK, the boost provided by extraordinary levels of household debt created in the 2000s, and the consumption it fuelled, collapsed spectacularly during the financial crisis of 2008.

These two facts are associated. Although wages are treated purely as a cost for businesses in conventional economics, where reductions in wages imply greater profits, and therefore more growth, this is only part of the story. Wages and salaries paid to employees are not simply a cost to businesses. They are also the means by which consumers buy products. If wages fall as share of income, it implies a shrinking of the market. The result is a drag on profits and growth.

The UK is a wage-led economy

Our research shows that, for nearly all European countries, including the UK, growth is ​‘wage-led’. This means that the boost to demand from rising wages outweighs other impacts on profits and international competitiveness; growth in national income is driven by growing wages more than by growing company profits.

For every 1% reduction in the share of national income going to wages, UK national income – measured by GDP – is reduced by 0.13%, or £2.21bn at current values. Wage share has declined from its 1975 peak of 76% to an historic low of 67% today; this has had a direct impact on national income.

The slide in the wage share is the outcome of deliberate government policy, enacted more forcefully in the UK than in much of Europe, to reshape labour market institutions. Trade unions have been legally curtailed and unionisation has declined from a peak of nearly half the workforce (49.9%) in 1981, to its low point today (25%).

The slide in union authority, as indicated in falling density, has driven the falling wage share. The literature suggests that this fall in union density is of far greater impact than ​‘skill-biased’ technological change or globalisation in explaining the decline in wage share.

Declining union presence has, as a result, fed directly into lower growth overall. The evidence we present suggests that the decline in union density, from its peak in 1975 to today, has reduced UK GDP by up to 1.6% – a significant and permanent loss. Restoring union density to the levels seen in the early 1980s would, thanks to the impact on the wage share, add £27.2bn to UK GDP.

The bias of policy for many years has therefore been mistaken, implicitly assuming the UK to be a profit-led economy. Far from boosting growth, and therefore promoting a ​‘trickle down’ effect, it has both worsened inequality by squeezing the wage share, and at the same time hampered overall economic development – a clear lose – lose. Restoring the wage share, in a wage-led economy like the UK’s, is a win – win: improving both equality and development. 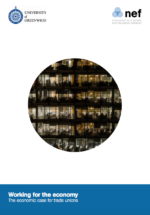