Local banking for the public good

We have a unique opportunity to rebuild public trust in the UK banking sector. Restructuring RBS into a network of local banks with a public service mandate and supervised by citizen stakeholders would transform the face of UK domestic retail banking and bring significant economic benefits.

The total price paid by taxpayers for their majority stake in RBS since it was rescued from bankruptcy by a large injection of public funds in 2008 has now exceeded £45.5 billion. With questions over the future of RBS placing the public interest at stake, the persistent assumption that the bank should be returned to the private sector deserves greater consideration, scrutiny, and debate.

We question whether privatisation is really the best strategy for the future of RBS, and consider an alternative that would create greater economic benefit for the country as a whole, including taxpayers. There are considerable uncertainties about the amount of money that could be raised by the government through a sell-off, how soon it could be raised, and whether it would be possible to avoid making a loss on the sale. But these are not the only grounds on which to question the Chancellor of the Exchequer’s intention to return RBS to private ownership as soon as possible.

Our analysis shows that turning RBS into a local stakeholder banking network will deliver significant economic and social benefits.

Through comparisons with public savings banks in Germany and Switzerland, we estimate UK GDP would already have benefited from an immediate boost of £7.1 billion, and an additional £30.5 billion over three years had localisation taken place in 2008.

Together with the other benefits of the proposal, this far exceeds the £700m annual savings in government interest payments that would result from using the estimated £40 billion proceeds from privatisation to repay the national debt.

The key benefits of restructuring RBS into a network of local stakeholder banks would be:

The bank’s current strategy of simplifying its business and focusing on UK retail and commercial banking has set the right direction of travel. We set out the steps needed to complete the journey, including withdrawing from international and investment banking markets, and the potential benefits of doing so for the UK economy.

The UK stands out among comparable countries for its lack of diversity in banking sector ownership. The building society sector is the only significant alternative to commercial banks owned by shareholders, but they do not serve the SME market.

Through an illustration of what an alternative might look like for one city and one county in the UK – Bradford and Cornwall – using a comparison with existing public interest banks in Germany, we demonstrate a number of the potential benefits of local stakeholder banks.

The financial crisis of 2008 rapidly eroded public trust in UK banking institutions. Establishing RBS as a genuinely local bank with an explicit mandate to serve the public interest, and to include citizens as stakeholders on its supervisory board, would go a long way to rebuild trust in the banking system as a whole. RBS could have a bright future – as a citizens’ bank built on principles of accountability and transparency. 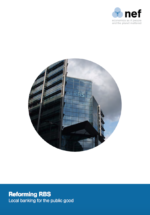