Democracy: the missing link in the devolution debate

Devolution in England could change the way we are governed and create a fairer dispersion of power, with more opportunities for people outside of Westminster to have a say.

An overriding focus on economic growth currently threatens to de-rail devolution by encouraging local governments to promise economic outcomes they could struggle to deliver, outcomes which are not necessarily in the residents’ best interests.

Presently the debate on devolution neglects the democratic transformations that could make devolution worthwhile. In this research, we map arguments in favour of devolution produced by central government, local government, thinktanks, and civil society groups between 2011 and 2015.

Decentralising power from Westminster to regions is a debate with a long history, one in which numerous governments have engaged, offering various regional power structures for the devolution of government functions and decisions – not least in Scotland, Wales, and Northern Ireland.

Following the 2014 Scottish independence referendum and the 2015 UK general election result, discussions of devolution now have a renewed sense of urgency.

Momentum is growing behind local authorities joining to create combined authorities and negotiating with Whitehall over the devolution of powers in health, housing, planning, enterprise, employment, skills, and transport. New agreements for devolution are being announced on a regular basis.

The Cities and Local Government Devolution Bill, which provides a legislative underpinning for making devolution agreements, is passing through parliament.

Voices in the debate are overwhelmingly positive about the prospect of devolution, which is seen as a ray of light in a decade of government spending cuts and political malaise, but the devolution agreements are not always as comprehensive as local government advocates hope.

Nor are they clear about the social, environmental, and democratic outcomes which devolution could achieve – tending to focus on important but limited economic outputs such as the creation of growth hubs and the development of transport networks.

In order for policy to be successful, policymakers must be clear about the outcomes, or in other words the change, they aim to achieve. New Economics Foundation (NEF) has demonstrated in our work with local and national government, that outcomes are best defined in partnership with the people to whom they are most relevant – the citizen, the end user, or the local stakeholder.

In its current form, the devolution debate is not creating space for a robust discussion of outcomes or for citizens to have a say. With the aim of supporting a more outcomes-focused and participatory approach to devolution, NEF worked with the Crick Centre at the University of Sheffield to map the outcomes being discussed in the devolution debate.

We aim to show which outcomes are prioritised, to highlight gaps in the debate, and to make it possible for citizen stakeholders – locally and nationally – to have a stronger voice in promoting the outcomes that matter to them. 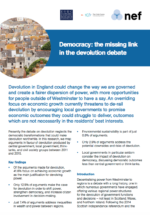