Efforts towards marine conservation and sustainable fishing must be made on a number of fronts: political, social, economic and environmental. NGOs typically engage in environmental debate, but many of the decisions made by policy makers and marine users are based primarily on socio-economic considerations.

It is increasingly crucial that marine charities and other non-governmental organisations (NGOs) can confidently engage in economic argument to support the sustainable change they campaign for. Since 2012, the Marine Socio Economics Project (MSEP) has worked to improve access and understanding for NGO staff to economic issues.

There were two overarching goals for the project:

A study by IMM Ltd for the Tubney Charitable Trust highlighted that a greater awareness of the social and economic issues surrounding the use of the sea would help NGOs campaign more effectively for marine conservation and widen their understanding of the socio-economic impacts of their campaign demands.

Working with four key UK NGOs involved in the fisheries-marine biodiversity debate, (MCS, RSPB, the Wildlife Trusts and WWF) the project has highlighted how economic arguments can be used to engage in debates around the socioeconomic value of different marine sectors, and to question government or industry analysis in a robust, credible manner.

To influence long-lasting sustainable change in how marine resources are managed, this work must continue. We’ve produced this collection of resources as a reference pack for new starters and staff who may be new to the economic concepts and language that underpin many of the socio-economic issues. It’s also for anyone with an interest in socio-economics, the marine environment, or both.

We produced the following resources as part of the MSEP project.

These briefings deal with key economic concepts, their application to public policy and identify the major flaws in some of the associated mainstream economic thinking. The briefings include marine-related case studies to show the real life application of these economic approaches.

These briefings are snapshots of the key statistics, trends and information from across the marine environment. They put the economic concepts from the first set of briefings into a marine context, and encourage project participants to replicate this approach in the future. To ensure the statistics remain up to date, we have included links to the main data sources used to conduct the research and analysis and can be accessed using the links below.

The resource pack also includes a summary of the key sources of relevant information for economic analysis; including trade and tax data which can be downloaded here.

The MSEP project ran a number of workshops between 2012 and 2015, listed below. The presentations and write-ups from these workshops are available on the project website and via the links provided below. 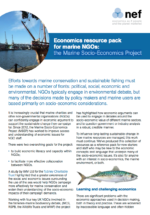