Analysis from the New Economics Foundation, in collaboration with the Copenhagen Business School, today reveals the huge public subsidy enjoyed by commercial banks through their control of Britain’s money supply.

Only 3% of British money takes the form of physical cash created by the Bank of England. The remaining 97% is electronic bank deposits created by private banks. This privileged position in the UK economy has enabled the likes of HSBC, RBS and Barclays to enjoy a subsidy of £23bn a year since 1998.

The subsidy amounts to 73% of banks’ after-tax and provisions profit — a huge financial advantage unavailable to non-bank businesses, including peer-to-peer lenders and the ​‘fin-tech’ sector.

With physical cash declining in proportion to electronic bank money, taxpayers have only a limited stake in this essential public infrastructure. The Bank of England and HM Treasury makes just £1.3bn a year through their issuance of new bank notes.

Had the Bank of England been responsible for issuing just 30% of Britain’s money supply, the public finances would have benefited from £182bn in accrued revenues since 1998 – around 11% of the current public sector net debt.

The UK banking sector — which is dominated by a small number of giant institutions — enjoy these huge annual subsidies as a result of seigniorage.

This term originally meant the difference between the cost of printing physical cash and its purchasing power. But in modern economies like the UK, 97% of money is now created as digital bank loans rather than cash issued by the state.

Unlike financial intermediaries such as peer-to-peer (P2P) lending platforms, banks do not have to acquire funds before making loans. This is because banks create new money in the process of granting credit, in the form of electronic bank deposits.

Our calculations (see note 2) show seigniorage profits for commercial banks amounted to £23bn per year between 1998 and 2016, equivalent to 1.23% of GDP and a total, cumulative profit of £443bn — a massive ​‘money for nothing’ subsidy given less than 10% of British banks’ lending actually supports businesses.

By granting commercial banks monopoly control over the supply of electronic money, the UK government is losing out on billions in potential revenue.

If the Bank of England were to issue digital currency directly, the government could recapture seigniorage revenue for the public purse – as it currently does with banknotes.

If just 30% of Britain’s money supply had been in the form of digital central bank currency instead of commercial bank deposits since 1998, the government would have gained £182bn in seigniorage revenue — a huge boost to public finances.

“Big banks have too much control over our everyday finances. Their grasp over Britain’s money supply has earned them billions in a hidden, money for nothing subsidy, given the majority of their lending does not support businesses.”

“Money creation is part of our vital public infrastructure. We can’t afford to let banks set the rules and then profit from them. The British state should also have the power to create digital cash, a power that commercial banks have enjoyed for decades.”

“Seigniorage is conventionally defined as the profits accrued by the sovereign through the creation of money. Today the lions’ share of seigniorage is accrued by private commercial banks. This fact should make us consider, where sovereignty lies in contemporary society.” 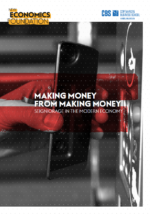