Why the race may be lost for fossil fuels

A year to the week since it celebrated a landmark decision to grant it permission for test-drilling in Yorkshire, the rumours are that shale gas company Third Energy are looking to float on the stock exchange. But fracking remains deeply unpopular and its economics are looking worse all the time: has their race already been run?

In the last year alone the cost of producing renewable energy globally dropped by another 10 per cent, with a record 138GW installed worldwide in 2016. Dong Energy has just announced it is selling all of its oil and gas operations to focus solely on renewables. And the UK recently marked 24 full hours without using coal – the first time in 135 years.

Meanwhile in transport, electric car maker Tesla’s market value recently overtook that of Ford. Research earlier this month suggested that as soon as 2025, all the new cars, buses and lorries we rely on to travel around could be electric.

This week three corporate giants announced that they are to make the switch to renewables or soon will. Unilever revealed that 100% of its UK electricity is now generated by Scottish windfarms. Tesco set out plans to be 100% renewable powered in Britain by the end of the year. And Lego even built a giant model windfarm to celebrate hitting its own 100% target three years early.

It’s not just the frackers who are lagging behind. Most fossil fuel companies aren’t keeping up. While Shell, BP and Exxon publicly call for climate action, their own projections for fossil fuel demand – thus, their entire business case – continue to be based squarely around the dirty stuff. At this week’s Shell AGM, its chief executive stated that meeting carbon targets in line with the Paris Agreement would be bad for shareholder returns. BP’s most recent Annual Energy Outlook claimed that despite decarbonisation they still expect the majority of the world’s energy to come from fossil fuels 20 years from now. And they’re far less convinced that electric cars are about to become the norm.

Quelle surprise! An oil company’s entire market value requires its shareholders to be satisfied that it can keep on merrily drilling for, and selling, oil and gas for many years to come. It’s a business model impervious to the dire need for change, as Jonathan Porritt noted in exasperation two years ago. The International Energy Agency, the establishment’s energy think-tank, has consistently underestimated the growth of renewable energy.

CHART 1: The electric generation capacity of renewables vs IEA predictions 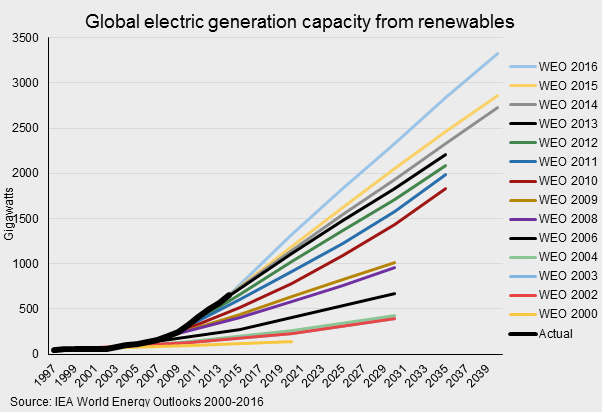 On one level, who cares if the likes of BP and Shell are about to get lapped? After all we are in a race to cut emissions seriously quickly. If dinosaur companies want to go the way of the dinosaurs, let them: Blockbuster video thought their business model had years left in it, and look what happened to them. And who knows, maybe they’re right – although if they are, it’s very grim news for the climate.

The shale gas industry’s ​‘not so fast’ approach , envisions a future with the UK on the fossil fuel hook for years to come; asserts that gas is cleaner than coal (technically correct, but still carbon-heavy) and insists ​‘our’ gas is better than, for example, that beastly Mr Putin’s gas. The Government laps it up, with subsidies, ​‘wealth funds’, and by forcing councils to accept fracking against the wishes of the communities who will suffer as a result. But perhaps this is race the frackers just won’t win. The UK has remained just about frack free for six years, thanks to local and national resistance. Over this time the share prices of already-listed fracking companies have plummeted. 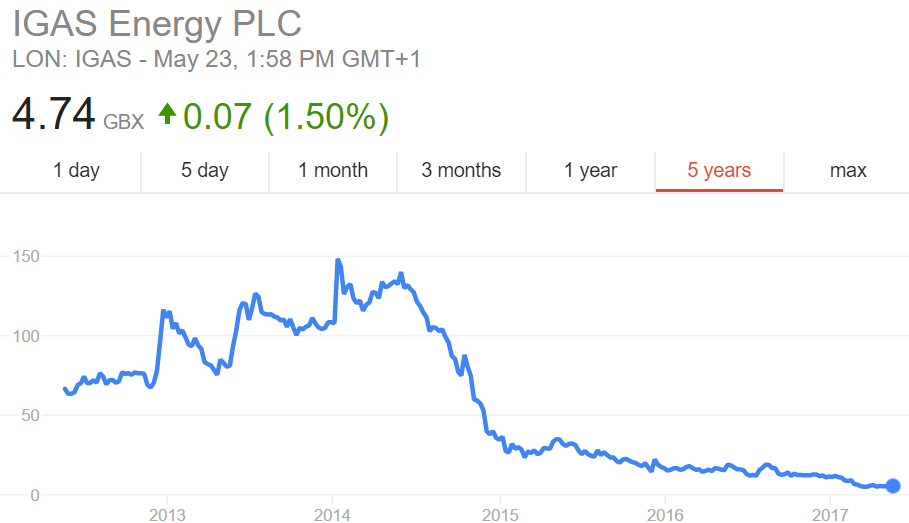 But it’s a problem if rather than try to keep up, these massive companies use the might of their deep pockets and lobbyists to get things slowed down a bit. Fossil fuel companies command political attention. Dirty subsidies continue. Fossil fuels are – astonishingly – seen as the solution, not the problem.

The world will decarbonise, but every drag, every wasted opportunity, every pound of taxpayers’ money going into fossil fuels, every ounce of political rhetoric urging us to go slow, all escalates the climate crisis facing us. Make no mistake that this is a race that really matters for all of us. That’s why we’re working to support communities facing environmental threats to amplify their demands for urgent action.