Central banks, climate change and the transition to a low-carbon economy

Central banks should use their power to support low-carbon transition 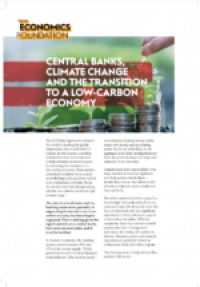 The 2015 Paris Agreement commits the world to limiting the global temperature rise to well below 2° Celsius. In this context, a number of initiatives have been launched to help stimulate financial support for achieving the transition to a low-carbon economy. These market-orientated initiatives focus mainly on mobilising existing private capital from institutional investors. So far, the results have been disappointing and the low-carbon investment ​‘gap’ remains huge.

The role of central banks and the banking sector more generally in supporting the transition to a low carbon economy has been largely neglected. This is striking given the significant influence central banks have over our economies, and it must be rectified.

In modern economies, the banking system creates between 85% and 97% of the money supply.¹ Whilst governments and non-bank financial intermediaries – like pension funds – tax and spend existing money, banks create new money and purchasing power via the act of lending. At the aggregate level, their lending decisions have the power to shape the long-term trajectory of the economy.

Central banks have responsibility over large swathes of financial regulation and their powers enable them – should they choose – to influence the allocation of private-sector credit and financial flows.

But while central banks have played an increasingly interventionist role in our economies since the financial crisis, this has not coincided with any significant adjustment of their policies to support a low-carbon transition. With few exceptions, there has not been notable pressure for this to change from politicians, the media, civil society or citizens. Monetary policy and financial regulation are generally viewed as technocratic fields, best left to experts.

This briefing seeks to help address this problem. Below we:

1) Explain how central banks should play a more prominent role in supporting a low-carbon transition rather than maintain the status quo;