Cities and Towns: The 2017 General Election and the Social Divisions of Place

Towns and cities are divided. Here’s what to do about it. 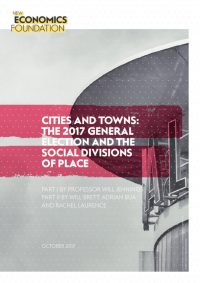 A characteristic feature of British society in 2017 is division. Leavers are pitched against Remainers, young against old, graduates against non-graduates. But perhaps the starkest way of understanding social division in the UK is to consider the places where people live.

The vote to leave the European Union in 2016 laid bare some of the deep and unsettling problems in much of the economy. For many people, these problems are expressed most clearly in their home towns. Far too many places in the UK fail to offer decent jobs and housing. Many towns serve only as satellites to urban centres where economic activity is concentrated. Other towns are left high and dry – disconnected, losing human and economic capital and going almost ignored in the UK’s current model.

And yet these are places which people call home. They are places filled with history and meaning, and they serve as anchors of people’s identity. At the New Economics Foundation, we know from our work with communities all over the country that many people have a deep and urgent desire to regain control over the places where they live, and to start building better local economies from the ground up.

But even as this divide between cities and towns deepens, communities in so-called ​‘left-behind’ towns are starting to build a new and better economy for themselves. At the New Economics Foundation, we are working with these communities to give them real control over their economic future and to start closing some of the place-based divides which have opened up in England.

But for this agenda to be successful, local people need support from local, regional and national authorities. Our ​‘manifesto for towns’, which forms the second half of this report, is aimed at everyone – from Whitehall down to the smallest community group – interested in starting to build better and more vibrant local economies.

1. Build up local supply chains: Local supply chains can give towns greater economic prosperity and cultural identity. They reduce the flight of resources away from an area, increasing their local retention and giving more ​‘bang for every pound’.

2. Improve the quality of jobs in the ​‘foundational’ economy: The foundational economy – those parts of the economy on which we all rely every day, and in which much of the workforce is employed – exists in almost equal relative measure in towns as much as in cities. Any industrial strategy or regional development plan which takes the foundational economy seriously – and indeed which prioritises foundational approaches over the more traditional hi-tech, city-centre led approach – would therefore be a huge boon to towns.

4. Develop more decentralised political institutions: Genuine devolution needs to occur. But this can only come from the centre letting go, which would then create opportunities for local government and local institutions to engage citizens in meaningful and innovative ways. These could include participatory and deliberative policymaking processes like participatory budgeting, which can connect the social justice agenda with democratic renewal.