The UK’s Financial System in the Era of Brexit 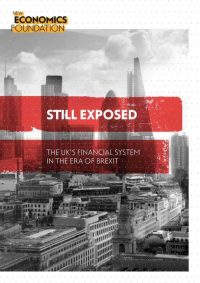 It is now almost ten years since the onset of the global financial crisis, but its impacts are still being felt across the UK. Thanks to weaknesses and irresponsibility in the financial sector, millions of ordinary people were left to pay a huge price. And while measures were introduced – in the UK and other developed economies – to ensure that the tragic human cost of the crisis does not happen again, many believe these have not gone nearly far enough.

Now the UK’s vote to leave the European Union raises new uncertainties around the future of the financial sector. In this context, three questions become vitally important:

This paper sets out to answer these three questions. We begin by updating our Financial System Resilience Index, first published in 2015, and find that:

Our analysis indicates that any outcome other than a ​‘soft Brexit’ will likely involve significant disruption to the financial sector, as financial institutions respond by shifting some wholesale activities overseas. This alone could pose risks to financial stability, but it also raises the possibility that the UK starts to roll back financial regulation and cut taxes in a bid to stem the outflow of business – a strategy that both the Prime Minister and the Chancellor of the Exchequer have hinted at. This would be the worst possible outcome.

While we were promised that Brexit would allow us to take back control, a move towards financial deregulation would do the opposite. It would lock us into a future of low regulatory standards designed to serve the interests of international finance, and would be a clear sign that lessons from the financial crisis have not been learned. It would create a much riskier and less resilient financial system, leaving people at the mercy of damaging forces over which they have no control.

But this is not inevitable. Our analysis suggests that the consequences of Brexit for UK financial system resilience will depend heavily on the domestic policy decisions that accompany them. Rather than seek to replace the lost business by lowering standards and attracting even riskier and more dangerous financial activity, we recommend the UK should instead seek to improve resilience by refocusing its financial system to better serve the domestic real economy and the needs of people now. The process of reshaping our financial system to better serve society can, and should, start now – regardless of the final outcome of the Brexit negotiations. To this end, we recommend that: