The case for capping the cost of credit 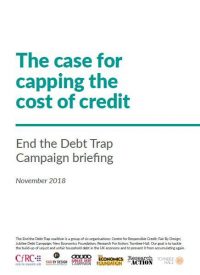 Approximately eight million people are caught in a debt trap: paying out an average of a quarter of their incomes each month to their lenders.

This high level of repayments, which will typically need to be maintained for a period of about five years, is unsustainable. It is placing household budgets under extreme pressure and inevitably leads to more borrowing to pay off previous debt, and often simply to make ends meet.

The debt trap is not the fault of a few ​‘rotten apples’ – lenders operating at the margins of regulation. It results from a system of ​‘risk-based pricing’. This incentivises lenders to target people who they know will struggle to repay with high cost credit. The high cost of credit covers the high default rates. It is profitable, and even more so when lenders structure their products in ways which levy high default fees or encourage continual refinancing.

Extending the total cost cap across the consumer credit market would significantly boost household disposable incomes. We estimate that this would result in savings for households of at least £6 billion per year. These savings would enable people to build up their financial resilience against future income and expenditure shocks, and, because many indebted households are geographically concentrated, also provide a boost to economies in deprived areas.

A cap is also better than other possible measures that could be taken to address irresponsible lending. FCA rules, such as those concerning persistent credit card debt, and those requiring lenders to conduct ​‘affordability assessments’, provide far too much discretion for lenders and don’t address the underlying incentive for them to ​‘game the system’. They are also costly to enforce: requiring intense supervision of firms. Even if better written, there isn’t any guarantee the FCA will get their enforcement right. For example, the FCA was too lenient when establishing a ​‘redress scheme’ for Wonga’s borrowers in October 2014.

It’s time for politicians from all parties to act. The debt trap is a product of the risk-based pricing system and capping the total cost of all types of consumer credit is the best way to tackle it.