Working together for a just transition 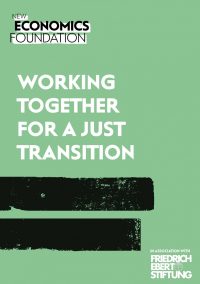 The end of the fossil fuel age is already underway. Global investment is flowing into clean infrastructure, the electrification of transport, and innovative new business models. The question is not whether nations firmly unshackle their economies from the legacy of a century of oil, coal and gas, but when.

The reality is that the twin imperatives of the starkness of climate science and the changing nature of the world economy mean that that this is likely to happen on a faster timescale than those who work in those industries, and the communities that depend on them, may be prepared for. Both the Government and Opposition have locked support for green jobs into the heart of their plans for industrial strategy.

While advocates of rapid climate action, trade unions, national and local leaders, and workers themselves all agree on the need for action, significant amounts of the UK’s industry and economy are still dependent on fossil fuels. The reasons for this hook deeply into broader structural failings of the UK’s economy as a whole – neoliberal economics; distrust between unions and Government; austerity; and the relative powerlessness of local places to shape their own clean future.

A ​‘just transition’ is needed which proactively manages this inevitable shift in a way that respects not just environmental urgency but also equality, social justice and democratic voice.

Industrial transitions can be managed well or badly. Done badly, they devastate people and places, like Mrs Thatcher’s dismantling of the coal mines in the 1980s. But done well, they offer an opportunity to deliver pioneering models for wider systemic reform – power, democracy and ownership – that would perhaps be impossible without that sense of urgency.

The UK is already one of the most divided and regionally unequal countries in the world. A new approach to economic development is needed that puts real power into the hands of places and communities to demand, design, and co-create healthy, sustainable and thriving local economies.

No lasting solutions to national problems can be forced onto the people that they most directly affect. The scale of what is needed to decarbonise the UK economy means the age of pitting ​‘winners vs. losers’ must end. Consensus, joint working, and a sense of shared endeavour are the only way that political support for radical decarbonisation can be seized and locked in.

This short pamphlet has been produced to launch the New Economics Foundation’s new programme of work on the ​‘just transition’. Our interest is in the practicality of change: the policies, processes, narrative and investment needed to accelerate the UK’s progress on ​‘just transition’, here and now. Over the coming months and years we will be working at local and national levels to explore what is needed to build common cause and provide the right mixture of incentives and critical challenge to all parties to help unlock a new momentum for a ​‘just transition’ for the UK.

It has been produced in association with the Friedrich-Ebert-Stiftung’s London Office, part of the international network of FES. The London office was established in 1988 to promote better understanding of British- German relations. FES’s work in the United Kingdom focuses in particular on the exchange of ideas and discussion on the following topics: common challenges facing Germany, the United Kingdom and the European Union; economic and social policy; experiences gained from differing regional and local policies and practices; and a continuing dialogue between politicians as well as between the trade unions in both countries.