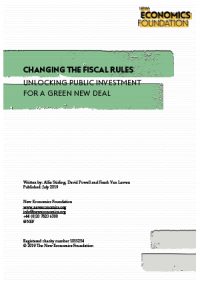 The physics of climate science are clear. We face irreversible shifts in weather, temperature and average sea levels that could ultimately prove fundamentally incompatible with a future in which human societies can flourish.

Perhaps for the first time in the UK, recognition of the sheer scale of change required has begun to go mainstream. The government has legislated for ​‘net zero’ greenhouse gas emissions by 2050, following advice from its official advisors on emissions policy, the Committee on Climate Change (CCC). Meeting even this target – which is significantly less ambitious than the demands of many climate campaigners, and may need to be brought forward – will require transformation in every resource and energy intensive sector of the economy, from power generation to heat, construction, manufacturing industry and agriculture. It will require the largest peacetime mobilisation of resources in the country’s history.

Commercial finance and investment will be fundamental to a successful transition, but it will not be sufficient on its own. Nothing on this industrial scale and speed has ever been achieved before without direct state financial support. Even the UK Treasury has reportedly acknowledged that the CCC’s new targets would not be credible without plans for ​‘increased government spending’.

The overall level of public investment required to fund such a transition is impossible to forecast accurately. The CCC estimates a total resource cost to transition of between 1 – 2% of GDP per year on average by 2050 – between around £20 billion and £40 billion in 2019/​20 terms (although the Department for Business, Energy and Industry estimates are reportedly higher) – which will need to come from a mixture of public and private finance. The share of public finance will likely need to be especially significant, and front-loaded in the short-term, with the main benefits to the environment and therefore society increasing more steadily over the medium- to longer-term.

“Commercial finance and investment will be fundamental to a successful transition, but it will not be sufficient on its own.”

Given the speed and scale of transition required, the current fiscal rules (targets for government debt and borrowing) are a real limiting factor for sufficient public finance. In ​‘normal’ times, public borrowing has historically been around 1.3% of GDP per year. Yet by the mid-2020s, even this baseline level of net borrowing would be precluded by the government’s current fiscal rules – let alone the level of additional borrowing required for a fair industrial transition. Sufficient public investment to support climate transition will therefore necessitate cuts elsewhere: requiring trade-offs between long-term societal health and wellbeing with those of a sustainable economy and climate. In view of growing pressures on public resources from aging population, technological change and globalisation, such trade-offs are likely to prove intolerable.

But how have we got here? Essentially, the current fiscal rules assume that the best time to use so-called ​‘fiscal space’ (the scope for further public borrowing before the amount of overall public debt presents significant risks to the economy) is always after a crisis has already taken place. But with respect to averting and mitigating a climate emergency this assumption is wholly inappropriate. In view of such a structural, rather than temporary problem, preventative investment to reduce current and future emissions today is many times more efficient than waiting to intervene until after the planet has warmed up. The current fiscal rules steer policy makers towards holding back space to borrow in reserve for the future, rather than borrowing for preventative investment today. This is despite the fact that being able to pay a little more unemployment benefit is an entirely inappropriate contingency when faced with food and land shortages caused by rises in global temperature and sea levels.

In the UK, we propose the Treasury should begin work immediately on how to define new fiscal targets borne from a more sophisticated analysis of how and when to use fiscal space. To do this effectively will require the development of two new analytic tools:

We also propose more explicit cooperation between the Bank of England and the Treasury in managing, maximising and deploying fiscal space. Part of this arrangement could make use of a new public investment bank (or network of banks) – hereafter green national investment bank (GNIB) for shorthand – to increase commercial lending to green industries. The GNIB could be used as a backstop against political negligence from government in the form of underusing fiscal space for ideological reasons. In exceptional circumstances – such as government failing to provide sufficient stimulus during a large economic shock – the Bank of England could be given the power to delegate additional investment in green lending to the GNIB, while also buying up GNIB bonds on secondary markets to ensure this lending could always be financed.

This NEF working paper was adapted from an essay written by the same authors for Common Wealth.