Why we need a cap on costs 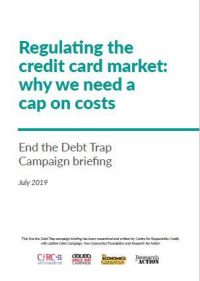 The UK is in the grip of a consumer debt crisis. As at April this year, households owed a staggering £217 billion; the highest level on record and greater than prior to the Financial Crisis of 2008. This figure excludes mortgages and student loans.

The burden of consumer debt falls disproportionately on the shoulders of poorer households. Almost half of those spending more than one-quarter of their income on debt repayments – the threshold for what is considered ​‘over-indebtedness’ –earn less than £15,000.

The build-up of household debt is a growing crisis and the use of credit cards is a very significant part of this. While access to credit is crucial to most people, it is neither morally right nor economically intelligent to permit lenders to target those on lower incomes with very high rates of interest in order to extract large profits. To end the debt trap, the coalition is calling for a total cost cap on all types of consumer credit.