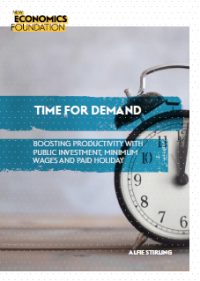 When combined with good labour market regulation and the presence of trade union power, rising labour productivity – output per hour worked – is the enabler of higher earnings for workers. Across time, the productivity increases are closely associated with rising pay and leisure time for workers. Across countries, there are also strong correlations between higher productivity and a myriad of social benefits, including improved health, higher life expectancy and reduced child mortality. In view of a suite of environmental challenges – from climate change, species extinction and resource scarcity – being able to do more (or at least the same) with less also represents an important tool in the project to embed advanced economies within sustainable planetary limits.

The UK, however, has a productivity problem. Annual improvements in productivity have stalled relative to their long-term trend, and in particularly dramatic fashion by international standards. Over more than four decades up to 2008, labour productivity grew at a remarkably stable rate averaging more than 2% per year. Since the end of the 2009 recession, however, the annual increase has fallen to around 0.7%, representing a collapse of around two thirds. More than ten years on from the financial crisis, there remains precious little sign of a recovery in the post-crisis trend and the UK has been left with one of the lowest levels of productivity among advanced economies.

This briefing paper argues that alongside continued supply-side interventions such as in corporate governance, industrial strategy and finance, demand needs to be increased significantly over the short-to-medium-term as part of a macroeconomic strategy for boosting productivity. To this end, we set out two packages for government intervention within two key areas:

Fiscal policy – changes in the level of government spending and taxation – can increase demand in the economy, either by directly raising government consumption, or indirectly increasing consumption by individuals and firms. We propose a package of broad-based measures to raise demand across three areas where the fiscal multipliers – the ratio of a change in overall demand to any change in spending by government – are particularly high:

Boosting demand through holiday and wages

Minimum wage policy can increase demand through higher spending power for workers. Giving employees time off to spend their salaries without reducing pay will amplify these effects. Increasing minimum wages are a particularly efficient way of boosting demand because workers on minimum wage are far more likely to spend rather than save any increases, compared with higher income individuals: