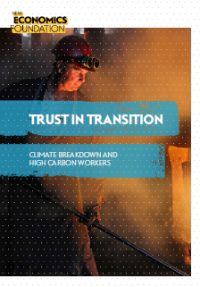 Britain has a terrible track record of managing deep industrial change in a just way. Decades of free market economic policy have undermined the prosperity of workers and communities. It is not surprising that we have ended up with a profound lack of trust: millions of people lack trust in elites; industrial heartlands lack trust in the direction of industrial change; and trade unions and workers lack trust in government promises that ​‘this time will be different’. The rebuilding of trust in transition to a zero-carbon economy is perhaps the central political challenge facing the UK as it decarbonises.

Increased climate ambition is just one of the forces set to reshape UK industry, whether driven by increased policy action at home or as markets are reshaped by the leadership of others. The Committee on Climate Change (CCC) has warned that the government’s policy actions are not up to scratch even before the UK’s new commitment to net-zero emissions by 2050 – a date that must be brought forward. The potential for job creation from clean industries and new business models is well established, but job creation in some sectors (such as energy) could be offset by job losses elsewhere – not necessarily in the same parts of the country, or among workers with similar skills profiles.

Accelerating decarbonisation must be a shared national project, but in a democracy, no change of the scale required can be forced onto people, particularly those whose way of life could be significantly disrupted. A UK gilets jaunes response would be a certainty.

Many workers and trade unions do not feel included in the conversation about decarbonisation, which is too often framed in terms that do not respect the shared identity, heritage, and lived experiences of people and communities whose hard work has underpinned much of the economic benefits of the fossil fuel age.

Areas of the country that are likely to be particularly affected do not have the resources, the flexibility, or the time that they need to shape meaningful transition plans. While the climate transition will affect the whole country, it will affect some regions acutely. Areas of the country with lower gross value added (GVA) per capita, including those that have already suffered the most from decades of deindustrialisation, are disproportionately reliant on clusters of high carbon industry – oil, coal, or gas production or generation – or other forms of economic activity that are likely to be most directly affected by the climate transition. Some regions of the UK, such as the East and West Midlands, Yorkshire and the Humber, and Aberdeen, are particularly exposed; in more than 40 local authorities, jobs in sectors that may be acutely affected by the climate transition make up more than 30% of all employment.

A just transition for people and places is essential. It has been a central demand of trade unions for decades, and a core commitment under the Paris Agreement on Climate Change. The just transition is principally a process, not a fixed outcome. It involves changing the priorities for industrial planning so that it ensures a fair deal for directly affected workers and communities – giving them a meaningful voice over how the transition evolves, and ensuring people and places are not left on the scrap heap as climate policy and global market forces unfold and interact.

The lack of progress in delivering a just transition to date is a core function of how our economy is run. Without the principles of a just transition process guiding industrial strategy, workers in high-carbon industries would be justified in distrusting that these changes will be to their benefit. Nor are there any guarantees that the jobs that are created will be good jobs, i.e., secure, well-paid, unionised, and with decent terms and conditions.

Done right, transitions – or transformations – are an opportunity to reshape how policy is made, and for whom. Business as usual is not an option in the face of global trends and the climate crisis. A new model is needed that seeks to localise industrial strategy around the distinct aspirations and needs of communities. The only kind of industrial policy that makes sense in the years ahead is one that responds to our economic, environmental, and social crises together.

Trust, the currency of transition, is in short supply. Rebuilding it has three essential elements:

1. Committing to government leadership and a Green New Deal.

A national plan, such as a Green New Deal, is needed to deliver a just transition in practice and set a clear mandate for industrial planning, delivering social justice and rapid decarbonisation together. More ambitious deadlines for economywide and sectoral decarbonisation are needed to ensure UK industry is not left behind as global markets change. Institutions, in particular the Treasury, should be given a clear mission to deliver the just transition via a Green New Deal. A new Just Transition Fund should be established, including by redirecting current economic support for fossil fuels.

2. Making sure workers are empowered to play an active role.

Trade union legislation must be revised so that unions can play an active role in setting national priorities for the just transition and co-designing industrial strategy, and to enable union members to organise and take legitimate industrial action if they feel that their workplace is at risk of being left behind as the country decarbonises. Workers should be supported to reskill and to take part in industry-wide transition planning by the government topping up wages, via a localised Just Transition Fund, to enable reductions in core working hours.

National carbon budgets should be mapped against the needs of regions or localities in a way that reflects the different carbon reduction trajectories of different parts of the UK. This would provide a focus for co-designed localised industrial strategies supported by the Just Transition Fund. These strategies must centre the just transition. This will require new combined city and county regional authorities and new local economic partnerships (LEPs) with a broader mandate and more democratic membership than existing ones.