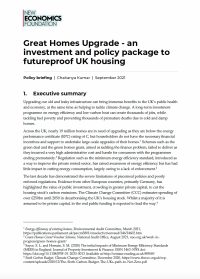 Upgrading our old and leaky infrastructure can bring immense benefits to the UK’s public health and economy, at the same time as helping to tackle climate change. A long-term investment programme on energy efficiency and low-carbon heat can create thousands of jobs, while tackling fuel poverty and preventing thousands of premature deaths due to cold and damp homes.

Across the UK, nearly 19 million homes are in need of upgrading as they are below the energy performance certificate (EPC) rating of C, but householders do not have the necessary financial incentives and support to undertake large-scale upgrades of their homes. Schemes such as the green deal and the green homes grant, aimed at tackling the finance problem, failed to deliver as they incurred a very high administrative cost and hassle for consumers with the programmes ending prematurely. Regulation such as the minimum energy efficiency standard, introduced as a way to improve the private rented sector, has raised awareness of energy efficiency but has had little impact in cutting energy consumption, largely owing to a lack of enforcement.

The last decade has demonstrated the severe limitations of piecemeal policies and poorly enforced regulations. Evidence from other European countries, primarily Germany, has highlighted the value of public investment, crowding in greater private capital, to cut the housing stock’s carbon emissions. The Climate Change Committee (CCC) estimates spending of over £250bn until 2050 in decarbonising the UK’s housing stock. Whilst a majority of it is assumed to be private capital, in the end public funding is expected to lead the way.

There is no credible pathway to net zero without energy efficiency and low-carbon heating from electricity, at scale. The Great Homes Upgrade is a package of measures, to be realised in the government’s 2021 spending review and the upcoming heat and building strategy, to put the UK on a rapid and credible pathway to retrofitting 7 million homes by 2025 and almost 19 million by 2030. The package includes:

With your support we can upgrade 19 million homes by 2030.