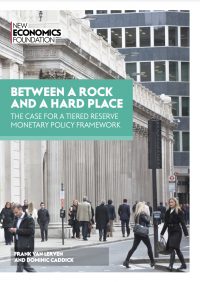 As the UK recovers from the economic fallout of the pandemic, we now face a mounting cost of living crisis. Underpinning this crisis is a changing set of macro-economic dynamics giving policymakers a new set of factors that may slow the growth of the economy. After a decade of dangerously low levels of inflation, interest rates at their zero to lower bound, and nearly £1tn in quantitative easing (QE), inflation has risen to its highest rate for 40 years and is set to increase even more. Greater inflation would traditionally prompt the Bank of England (the Bank) to raise interest rates to alter credit conditions and dampen aggregate demand. But policymakers face a colossal problem – the Bank’s monetary policy toolkit is dangerously out of date and not designed to address today’s changing macro-economic circumstances. As a result, while so many families across the UK struggle with a soaring cost of living crisis, interest rate changes mean the Bank will be boosting the profits of banks through billions of pounds worth of payments (income transfers).

An innocuous change to the Bank’s monetary policy framework in 2009 now means commercial banks are remunerated, at the Bank’s policy interest rate, for all of their holdings of central bank money. But paying out interest to the banking sector for holding money in this way is an exception, not a historic norm. Given the lack of policy alternatives at the time, this method of conducting monetary policy may have been expedient in 2009. But with the banking sector now holding nearly £1tn in central bank reserves, higher inflation, and rising interest rates, three traditionally distinct issues have become needlessly conflated at an unnecessarily expensive cost to the government. The adjustment of the Bank’s interest rate – aimed at altering credit conditions – now has enormous repercussions increasing both the amount of government interest payments and the profitability of the banking sector.

The consequences of increased interest rates on government spending are well documented. In his recent 2022 Spring Statement, Chancellor of the Exchequer Rishi Sunak has warned how a further 1% increase in inflation and interest rates could add £18.6bn to the amount of interest the government has to pay on its debt in 2024 – 25 and £21.1bn by the end of the forecast. These increased costs may threaten to hamper – at least politically, even if not economically – both the government’s attempts to further stimulate the economy given a slowing recovery as well as the transition to net-zero emissions.

To offer a more precise estimate of the Bank’s income transfers to the banking sector, we cross-reference market expectations for interest rates against a stock of reserves consistent with the Bank’s current plans for unwinding QE. Markets expect interest rates will rise to 2.5% by summer 2023, before gradually falling to 2.0% by January 2025. Based on this implied pathway of interest rates, the Bank would have transferred £15.08bn by FYE 2022 – 23 to the banking sector – equivalent to reversing all cuts to welfare payments since 2010 – and a total of £57.03bn by FYE 2024 – 25 – enough to fully retrofit over 19 million homes in the UK or to send every household in the UK a cheque of £2,000.

Given current financial conditions, there is good reason to believe that these income transfers will most likely be directly passed on into banks’ bottom-line profits, rather than being paid to customers holding bank deposits. Not only will these income transfers boost banks’ profits at a time when many families across the UK are struggling with rising costs of living, but they will also go to an already heavily subsidised banking sector that in the last year has seen its pay growth more than treble the wage growth in the rest of the UK economy. The income transfers will be for no extra credit risk taken and arguably for no additional services rendered; they come about by virtue of the banking sector’s exclusive ability to hold central bank reserves.

While many organisations, like the OBR and the Treasury, may often refer to central bank reserves as a form of public debt, we show that they are not debt instruments (ie loans from the banks to the Bank). Instead, they are a form of government money, like notes and coins. No money was ever borrowed or needs to be paid back, and therefore the Bank does not need to pay out any interest. Paying out interest and thus making significant transfers to the banking sector, is just one of many policy choices available to the government.

One possibility to avoid making such considerable income transfers to banks would be for the Bank to rapidly sell off its current bond holdings accumulated through its substantial QE programme, which would drastically reduce the amount of central bank reserves held by the banking sector. In addition to jeopardising monetary and financial stability, this would substantially increase the net interest servicing costs of the government and would result in the Bank making significant losses that would have to be covered by the Treasury. Given the Bank bought the majority of government bonds when interest rates were low, selling them when interest rates are higher means the Bank will receive less than what it bought them for. These losses could amount to anywhere between £105bn and £265bn.[v] A rapid sale of government bonds by the Bank would also dramatically increase interest rates while reducing the government’s profits from the Bank’s holdings of government bonds and thus considerably increase the government’s net debt servicing costs.

Under the existing monetary policy framework, the Bank is caught between a rock and a hard place: it can either continue making considerable income transfers to the banking sector or it can dramatically increase the debt- and interest servicing costs to the government. The Bank’s monetary policy framework is unnecessarily expensive, politically impalpable, and results in the Bank making fiscal transfers to one specific sector of the economy (to which other sectors are not privy).

There is a policy alternative and precedent, known as ​‘tiered reserves’, which is employed in other countries (in the Eurozone, Japan, and previously in the UK). This permits the distinct separation of the Bank’s policy rate from the government’s interest servicing costs and the profitability of the banking sector. Importantly, a tiered reserve system would mean the Bank would not have to unwind QE or sell any government bonds at the expense of the taxpayer, and monetary and financial stability.

Grounded in the experience of the Bank of Japan (BoJ) and the European Central Bank (ECB), we offer an illustrative proposal – with three distinct possibilities for remunerating central bank reserves – for how such a framework could work in the UK. Based on market expectations of interest rates, even with QE unwinding a tiered reserve system could save the government between £10bn and £15bn in income transfers to the banking sector by March 2023 and between £25bn and £57bn by March 2025.

Transitioning to such a framework would entail important policy decisions that should not be taken lightly. Given that a tiered reserve system would result in a dramatic reduction of interest costs to the government, the Treasury and the Bank have criticised this reform proposal as fiscal policy through the back door. These censures, however, neglect that the alternative – billions of pounds in income transfers to the banking sector during a cost of living crisis – is a form of fiscal policy that is surely less aligned with the public good and societal interests.

Another issue to consider is that withdrawing these significant income transfers from banks will affect their profit margins, which might lead them to pass on losses to their customers, by raising the cost of borrowing. However, this issue only materialises under conditions that would normally warrant the Bank to raise interest rates and drive up the cost of credit. As noted by a recent IMF (2022) paper that advocates for such a tiered reserve system, passing on the higher cost of borrowing to customers ​“would be a feature, not a bug, as it would amplify the desired contractionary effect”. The transition and trade-offs would need to be managed carefully, but this problem is hardly insurmountable given that increasing interest rates and raising the costs of borrowing is exactly what the Bank is trying to do.