There is a wave of experimentation, from new non-profit schools to health, housing and leisure services being run by the communities they serve.

The debate between public and private ownership is going nowhere fast. But there is real energy and innovation in what we call social ownership, non-profit co-operative and voluntary sector models for running public services. They show how to put the public back into public services.Examples include:

A full programme of mutualisation, the report says, would start with public services that have clearly failed. It would focus on smaller-scale organisations, such as schools or hospitals, with ​‘populations’ of 400 – 600 people. The National Health Service (NHS) could be ​‘de-merged’ into a MHS (Mutual Health Service) built on smaller, more manageable self-governing mutuals. The exceptional record of tenant-owned or managed housing should be recognised. Local education authorities should be reformed as ​‘secondary mutuals’. 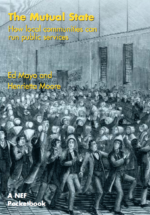