Making the most of every pound that enters your local economy 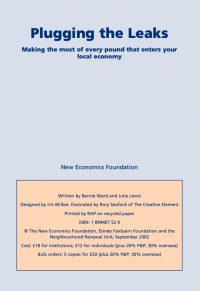 An easy-to-use handbook which teaches ordinary people how help create a thriving local economy where they live.

Plugging the Leaks is based on a tried-and-tested method that has helped countlesss communities, both big and small, urban and rural, both in the UK and elsewhere.

This handbook is a guide to a new approach to revitalising local econonomies. It can be used as a basic introduction to economics, as well as the starting point for a new involvement with your local area.

Since there is no such thing as a ​‘standard’ community, this handbook has been written in a way to be applicable to almost any location. We’ve also tried to make it appropriate to a very wide range of community organisations, including public sector bodies, voluntary organisations, business networks, regeneration bodies, religious groups and so on.

If you’re worried about your local economy, this is the handbook for you. It’s a tried and tested guide for ordinary people to understand what is going on in their local economy, so they can be involved in decision-making.

You can’t level up without a Green New Deal

Our government wants to be known for two things: levelling up, and fighting the climate crisis. But they don’t really understand how the two are connected.