The Price of Power

The approaching energy crisis and the renewable revolution

Recent optimism about ending human poverty has overlooked two major issues: the lack of access to reliable, clean energy sources in the poorest parts of the world, and the looming threat of potentially catastrophic climate change.

The lack of access to reliable and clean energy supplies is a major barrier to improving well-being around the globe — there are an estimated 1.6 billion people living in the rural areas of developing countries who lack access to to electricity — but so is dependence on fossil fuels. Climate driven ​“natural” disasters also threaten far worse. Rather than just failing to improve the human condition, we could be about to witness the great reversal of human progress.

Yet it doesn’t have to be like this. Clean renewable energy sources have huge, barely tapped potential. Not only can they provide all the energy needed for human development, they can also abate the pollution that adds to climate change and kills countless people every year. They can supply power to communities, but where the technology is developed, implemented and maintained by local people, they can also empower communities who have in other ways been marginalized. 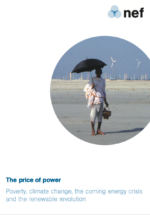