The unbalanced distribution of benefits and costs from economic growth

Growth isn’t working: the uneven distribution of benefits and costs from economic growth shows that globalisation is failing the world’s poorest as their share of the benefits of growth plummet, and accelerating climate change hurts the poorest most.

The report reveals that the share of benefits from global economic growth reaching the world’s poorest people is actually shrinking, while they continue to bear an unfair share of the costs. New figures show that growth was less effective at passing on benefits to the poorest in the 1990’s than it was even in the 1980’s- the so-called ​‘lost decade for development’ — and an age of rising climate chaos will worsen their prospects.

The report says that the notion that global economic growth is the only way of reducing poverty for the world’s poorest people is the self-serving rhetoric of those who already enjoy the greatest share of world income.

It’s authors argue that to achieve real progress we need to change in the way we think about and discuss economic issues, and break out of the confines of mainstream economic thinking. We also need a shift in power relations, both globally and nationally, to move power from developed countries, elites and commercial interests to the majority of the world’s population, the poor 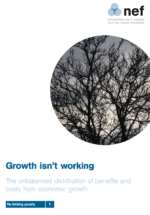