Migration and the Remittance Euphoria

Migration will cease to be a ​‘problem’ only when immigration becomes a matter of choice, rather than one of necessity, for all the world’s people.

Achieving this would require wide ranging reforms to the global economy to tackle global poverty.

Migration has the potential to enrich the lives both of migrants and of the communities in which they live, but immigration from developing countries will not be transformed into the voluntary, beneficial and welcome movement of free persons that it could and should be unless global policies are refocused to put poverty reduction at the centre of economic policymaking, instead of merely a hoped-for by-product of economic growth.

Unless and until such a reform takes place controlling immigration will remain an intractable problem for the industrialised world. Worse, the benefits of migration to the sending countries will at best only partly relieve the symptoms of a fundamental malaise, and may well increase the vulnerability and dependency of their economies still further. 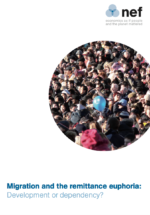