A manifesto for growing the core economy

The term ​‘co-production’ was coined originally at the University of Indiana in the 1970s when Professor Elinor Ostrom was asked to explain to the Chicago police why the crime rate went up when the police came off the beat and into patrol cars.

It was used again in the UK by Anna Coote and others at the Institute for Public Policy Research (IPPR) and the King’s Fund to explain why doctors need patients as much as patients need doctors and that, when that relationship is forgotten, both sides fail.

It was then developed and deepened by Professor Edgar Cahn, the Washington civil rights lawyer, who has written the foreword NEF’s manifesto for growing the core economy. He used it to explain how important neighbourhood level support systems are — families and communities — and how they can be rebuilt. Cahn recognised that this is economic activity, but in the broadest sense.

As far back as Aristotle, philosophers have understood that these critical family and community relationships were a second economy, originally called oekonomika. Economists have since demoted it by calling it the non-market economy. The environmental economist Neva Goodwin reversed the hierarchy by calling it the ​‘core economy’. Co-production points to ways in which we can rebuild and reinvigorate this core economy and realise its potential.

NEF’s manifesto shows how public services can play a part in making it happen. nef’s manifesto charts the development of co-production, its growth in the UK, and sets out a ten point plan for what will be, in effect, the biggest revolution in social policy since William Beveridge introduced the welfare state 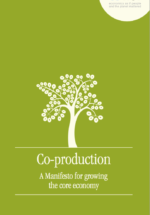