A pack of four newspapers all set in 2027, each from a different climate change scenario.

The aim of the newspapers is to help you to think about how climate change will affect your communities, organisations and families, and what you might do in the next few years to help tackle climate change.

What will the world be like in 2027? What will climate change mean for our lives? How will society meet the challenge?

No one knows for certain what the future will look like. But this project offers a snapshot of some of the possibilities. Working with climate scientists, social theorists and community activists, we’ve brought you four newspapers from four very different 2027s.

The Interdependent comes from a time where we have used the values community and social solidarity to reduce our carbon emissions. Whilst we all feel the effects of a moderate rise in global temperatures, strong social bonds have allowed us to remain happy and healthy.

The Control Express is a newspaper from a future in which the state has acted forcefully to control climate change. Taxation and rationing have protected us from the worst effects effects of climate change but at a cost to individual freedom.

The Coping Standard comes from a future where a deep sense of shared was not enough to prevent catastrophic global warming. As society struggles to adapt, we draw on social bonds to protect the most vulnerable.

The Chaos Telegraph comes from a world in which climate change and social division have continued unabated. As the global climate becomes increasingly chaotic, those with the resources to do so seek out safe havens, while the majority of the global population face an uncertain future.

These newspapers provide a great way in for people looking to understand what climate change will mean for everyday life. They could be used to kick off a lesson or a group discussion on the politics and economics of living with climate change.

The scenarios described in the newspapers are based on social and political extrapolations of two climate models, drawn from work by the Intergovernmental Panel on Climate Change. In the more optimistic possibilities, sharp cuts in emissions lead to manageable rises in global temperature of around 2 degrees. In the worst case scenarios, unabated emissions lead to rises of 6 degrees or more causing severe disruption. 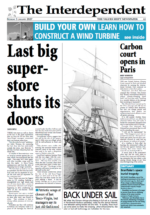