The case for sustainable food

The report sets out that the notion of sustainable food can serve as the basis of an agenda for action with the objective of re-orienting the food system so that its explicit objective is to enhance well-being, and as such is both fairer and greener.

At the same time, it is now apparent that the notion of ​‘sustainable food’ has important advantages over local food for framing the next phase of the debate. We define sustainable food as food associated with high levels of well-being, social justice, stewardship and system resilience.

A focus on sustainable food is particularly attractive because it provides a basis for a holistic approach to the challenge of re-making the food system. Issues around well-being, social justice, stewardship and system resilience arise throughout the food system – in production, processing, manufacture, transportation, retail, preparation and waste disposal – and for producers, workers and consumers, whether they are located in the UK or abroad.

The final section of this report argues that the notion of sustainable food can serve as the basis of an agenda for action with the objective of re-orienting the food system so that its explicit objective is to enhance well-being, and as such is both fairer and greener. The proposition underlying this agenda for action is that the transition towards more sustainable food must go hand-in-hand with fundamental changes in where and how we live and work, our family and neighbourhood interactions and consumption patterns.

In the coming years, these changes will be driven by three main factors: the imperative to cut greenhouse gas (GHG) emissions; peak oil; and the increasing realisation that well-being, social justice and security are ill-served by an economic system that caters to a privileged few while placing huge burdens on the poor and on the world’s ecosystems.

At one level, therefore, in order to move towards more sustainable food we must:

In addition, government at all levels needs to develop and implement a coherent and integrated food policy that is directly and explicitly articulated with relevant economic, social, environmental, climate change and security policies.

At the heart of this policy must be an acceptance that food is different from other sectors and consumer items and that this difference confers special responsibilities on government. Specifically, a new food policy must mount a full-scale attack on ​‘cheap food disease’ which is now endemic to the food system and which manifests itself through labour exploitation, environmental degradation and diet-related ill-health. 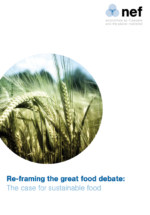