Public Services Inside Out 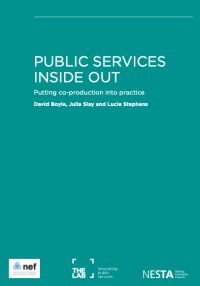 This report documents the many ways in which citizens are engaging with public service professionals, in health and social care, housing, childcare, education and criminal justice, to design and deliver activities that meet their needs and deliver better results.

It is about real stories of reform, led by people who work in and use public services. The examples included in this report didn’t rely on expensive consultants, troublesome IT systems, or grand blueprints drawnup in Whitehall departments and Westminster think tanks. They depended only on the commitment and creativity of frontline workers and members of the public who wanted better services.

In spite of this – or more likely because of it – these examples represent a radical new approach to public services. They embody what has come to be known as ​‘co-production’: public services that rest on an equal and reciprocal relationship between professionals, people using services, their families and neighbours.

They exist today not as promises in pamphlets or manifestos, but as real services serving real people more cheaply and more effectively than traditional approaches.

This is public services inside out – innovation that overturns the conventional passive relationship between the ​‘users’ of services and those who serve them. As we enter a period in which cuts and savings will be made from on high, these examples point to the possibility of a different approach: better, cheaper services created from the ground up by those who know public services the best.

This is the second of three reports on coproduction from a partnership between New Economics Foundation (NEF) and NESTA. The first report, The Challenge of Co-production, published in December 2009, identified the problems in trying to reform public services from the centre. It pointed to the exhaustion of improvement efforts through a so-called ​‘New Public Management’ of seemingly endless institutional re-wiring, targets and ​‘efficiencies’ – especially in the face of long-term challenges such as an ageing population and a rise in debilitating health conditions. It also explained why co-production offers the possibility of more effective, and so truly efficient, public services.

We have been inundated with messages from people who wanted to know more, or who felt they were already doing co-production. Often they were working in the most difficult circumstances, outside the mainstream or ​‘tolerated’ in the corner of major public service organisations. Since then we have been working with a community of practitioners to learn from their experience. In the space of just a few months this community has grown to over 100 people. Their insights, challenges and successes are at the centre of this report. They have shown us how co-production can be applied across a huge variety of public services to achieve cheaper, better outcomes.

From family nurse partnerships to parent-run nurseries, community-led justice to patient-led recovery from brain injuries, the examples here demonstrate six main themes. These include recognising people as assets and building on their existing capabilities, establishing mutual responsibilities between professionals and the public, and supporting people to support each other. Based on these examples, co-production is strongest when it embodies all six of the themes highlighted in this report.

These practitioners might be surprised to find themselves at the forefront of a radical new approach to public services. They have been developing new approaches ​‘because it makes sense’ or simply because ​‘it works’. Based on their practical experience, they have recognised that services need to be founded on new partnerships with the public, whether students, those in supported housing, living with a long-term illness or experiencing a mental health problem – and that the partnership could be a one-to-one relationship or a community of mutual support.

But in bringing these services to life, these practitioners are realising a vision that is increasingly shared across the political spectrum – of public services that are designed around the public, that are better at building people’s capabilities to be productive and healthy citizens, and so are more efficient, effective and sustainable.

The evidence here suggests savings of up to six times the investment made in new approaches – and of course better outcomes for the public.

It would be tragically counter-productive if, in the coming context of cuts, policymakers were to defend traditional approaches in public services at the expense of these new, better approaches. Now is the time to think about how co-production can move into the mainstream of public services.

The first task is to understand the challenges faced by these practitioners as they have experienced them. As detailed in this report, these include difficulties in securing support from existing funding and commissioning, traditional approaches to audit and accountability in public services, and developing the professional skills required to bring these approaches into the mainstream.

But the fundamental and provocative issue underlying all of these barriers is that co-production is sometimes blocked because it takes seriously the current political rhetoric about ​‘devolving power’ and ​‘empowering communities’ – because it challenges the costly but conventional model of public services as a ​‘product’ that is delivered to a ​‘customer’ from on high, and instead genuinely devolves power, choice and control to frontline professionals and the public.

The second task, then, is to identify how policy needs to be radically rethought to support the wider spread of co-production, and what ​‘achieving scale’ means for services that are inherently local in nature. This will be the focus of the final report in the series.