We need a transformation in welfare provision, but even more important are measures to tackle the underlying causes of inequality.

We need a transformation in welfare provision, but even more important are measures to tackle the underlying causes of inequality.

Over sixty years we have grown accustomed to benefits and services provided by the welfare state. All the while, the volume of provision has expanded exponentially, driven by a growing and ageing population, by rising public expectations, and in some cases, notably healthcare, by scientific advances and by supply driving up demand. This expansion was possible because the economy continued to grow.

Then came the collapse of global financial systems and a steep economic downturn from which ​‘recovery’ is uncertain. Furthermore, the prospect of more economic growth is problematic: evidence suggests that growth in the ​‘developed’ world cannot be ​‘decoupled’ from carbon emissions sufficiently and in time to avoid catastrophic climate change.

So it makes sense to plan for minimal growth or none at all. In that case, what will become of the welfare state? Deep cuts are already planned by the Labour government and by the Tories — and neither party has yet contemplated a future without growth. What should be saved and what thrown overboard? More important, how could and should the welfare system be restructured? 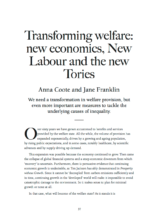