Taking co-production into the mainstream

People’s needs are better met when they are involved in an equal and reciprocal relationship with professionals and others, working together to get things done.

This is the underlying principle of co-production – a transformational approach to delivering services – whose time has now come.

For over a year, NEF and NESTA have been working together to grow a network of co-production practitioners. We are building a substantial body of knowledge about co-production that offers a powerful critique of the current model of public service delivery and a key to transforming it.

The conventional delivery model does not address underlying problems that lead many to rely on public services and thus carries the seeds of its own demise. These include a tendency to disempower people who are supposed to benefit from services, to create waste by failing to recognise service users’ own strengths and assets, and to engender a culture of dependency that stimulates demand. Co-production has the potential to transform public services so that they are better positioned to address these problems and to meet urgent challenges such as public spending cuts, an ageing society, the increasing numbers of those with long-term health conditions and rising public expectations for personalised high quality services.

This is an important time for those of us who have been trying to shape a new conversation along these lines, arguing that the key to reforming public services is to encourage users to design and deliver services in equal partnership with professionals.

The government wants to put more power into the hands of families, groups, networks and local enterprises, to realise its vision of a ​‘Big Society’. Co-production is central to realising that vision because it offers an effective way of combining the public resources allocated to services with the assets of those who are intended to benefit from them. It promises a new kind of public sector based on relationships rather than departmental structures. By transforming the way public services are understood and conceptualised, designed and delivered, it promises more resources, better outcomes, reduction of unnecessary waste and diminishing need.

We have a unique opportunity to rethink and reshape the relationship between citizens and the state. If we get it right, then co-production will help rebuild public services as equal and reciprocal partnerships between professionals and the people they serve. If we get it wrong then we may see the post-war welfare state dismantled without sustainable alternatives, while citizens – especially those who are poor and powerless – are left to fend for themselves.

This document is the last of three reports from NEF and NESTA. The first report, The Challenge of Co-production, published in December 2009, explained what co-production is and why it offers the possibility of more effective and efficient public services. It offered the following definition of co-production:

Co-production means delivering public services in an equal and reciprocal relationship between professionals, people using services, their families and their neighbours. Where activities are co-produced in this way, both services and neighbourhoods become far more effective agents of change.

The second report, Public Services Inside Out, published in April, described a co-production framework comprising the following key characteristics:

Now is the right time to move co-production out of the margins and into the mainstream. This report provides the basis for a better understanding of how to make this happen. We have identified four barriers to mainstreaming, which this report looks to address:

Our work has shown that co-production is developing strongly on the periphery of public services, especially in social care and supported housing. It offers transformative solutions not only for these sectors, but also for a range of complex relational services including healthcare, criminal justice, education and welfare to work. Yet the structural and cultural features – and the in-built bias of the incumbent delivery model make it difficult to take it into the mainstream.

This report offers recommendations for the direction of travel, based on what we have learnt so far. They focus on three themes:

This series of reports does not provide all the answers that we need. NESTA and nef will be embarking on further work to consider how to move co-production into the mainstream. This work will combine practical experiments with policy and research to look at how this can be done. This is the right time to take co-production in to the mainstream so that it becomes the default model for public services. 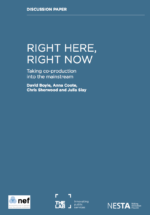