The ‘Big Society’ and the new austerity

The ​‘Big Society’ is a defining policy of the Coalition Government and David Cameron’s big idea. It is also a government-led programme for structural change. In this report, nef analyses the opportunities and threats of the ​‘Big Society’ vision, and how it will effect businesses, the third sector and democracy.

What is the ​‘Big Society’?

The ​‘Big Society’ is the Government’s big idea and a programme for structural change. The goal is to devolve power to the lowest possible level and use the state to galvanise community engagement and ​‘social renewal’.

The ​‘Big Society’ idea goes hand in hand with deep cuts in public spending. The cuts are only feasible alongside a strategy for shifting responsibility away from the state – to individuals, small groups, charities, philanthropists, local enterprise and big business.

The cumulative effects of the spending cuts will have a strong influence on the way the ​‘Big Society’ is realised. There will be many more people out of work, facing a punitive benefits system and drastically pared-down public services, and more polarisation between rich and poor neighbourhoods. Unpaid labour and the charitable and voluntary sectors are due to fill the gaps left by public services, providing support to increasing numbers of poor, jobless, insecure and unsupported individuals and families.

How will the ​‘Big Society’ work?

There is no master plan or blueprint for the ​‘Big Society’, because the Government says it wants decisions to be taken locally. There are, however, three core components: ​‘empowering communities’, ​‘opening up public services’ and ​‘promoting social action’.

A suite of government-backed initiatives is intended to help build the ​‘Big Society’, including a ​‘Big Society Bank’, 5,000 ​‘community organisers’, a ​‘Big Society Network’, a national ​‘Citizens’ Service’, four ​‘vanguard communities’, a rebranded government Office for Civil Society, and structural reform plans, with six departmental priorities including ​‘supporting the building of the Big Society’.
Where do the ideas come from?

The ideas behind the ​‘Big Society’ are traced back by some to John Locke, Edmund Burke, William Cobbett, Thomas Carlyle and John Ruskin. More recent influences include American conservative communitarians who call for a return to ​‘community and civic order’.

What do people make of it so far?

Less than half the population (45 per cent) has heard of the ​‘Big Society’, although there is strong support for the idea of people ​‘pulling together’ to improve things locally. So far, most commentators warmly welcome the vision of more local control and action, and more participation by citizens and community-based groups. There are worries that small local organisations will find the challenge too burdensome, that the poorest and most marginalised citizens will be least able to reap any benefits, and that public spending cuts will prevent the ideals of the ​‘Big Society’ from being realised in any plausible form.

What’s good about it?

What are the big challenges?

For all its potential, the ​‘Big Society’ raises a lot of questions, which become more urgent and worrying in the light of public spending cuts. The main challenges are these:

How to make the best of the ​‘Big Society’

The ​‘Big Society’ is deliberately open-ended. It can be seen as an opportunity to be seized – to define and shape it ourselves. Here we set out ideas, many developed by nef, to fill in the gaps and make the best of the big idea. They depend, however, on the government revising its policies on public spending cuts to provide consistent and adequate support for local government, community groups and third-sector organisations. 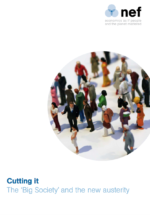